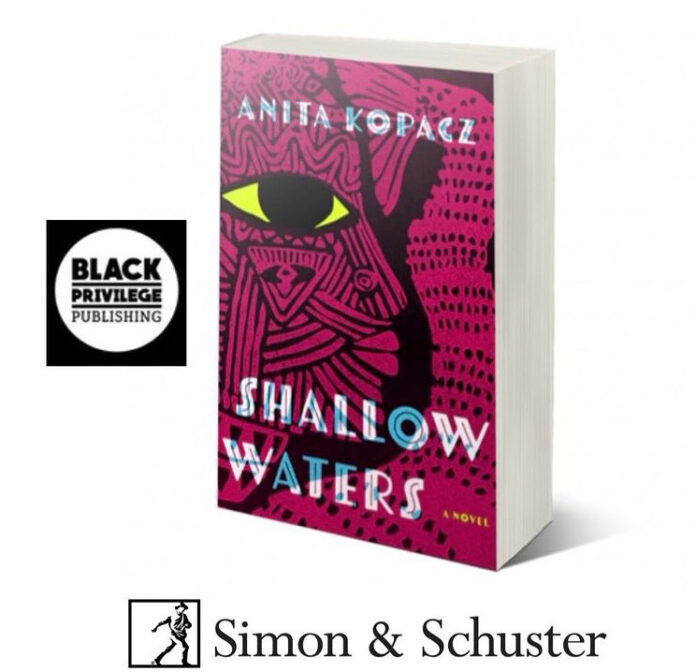 When Charlamagne Tha God, the host of the breakfast club and advocate of black mental health teamed up with Anita Kopacz, a spiritual psychologist that helps men and women overcome childhood trauma, domestic violence, sexual assault, and human trafficking; together they produced magic in a book called, “Shallow Waters”. Shallow Waters is now available for pre-sale and debuts on August 3, 2021.

Shallow Waters is about the Yoruba deity “Yemaya”, known as the goddess of the sea. Legend has said, when Africans were hoarded onto the slave ships, Yemaya came with them, thus becoming the Goddess of the Ocean. It is believed that she is a protector.

​To this day, she is celebrated across the diaspora. Celebrations typically begin on January 1st and go until the end of February. She is known by several names, but her traditions continue in the countries to which her people were dispersed: North and South America, the Caribbean and along the West African Coast.

Kopacz, a survivor of childhood trauma, started writing to comfort her spirit. In 2010, she published, “Finding Your Way”. A book that explains life’s most basic and valuable lessons from spiritual concepts created to enrich the soul.

In 2019 she started a company called, Zero F’s Given which first launched as a tee shirt campaign to help The Center for Safety & Change. The Center for Safety & Change is a nonprofit organization serving victims of domestic violence, sexual assault, and other violent crimes. Oprah Winfrey, Charlamagne Tha God and many other celebrities wore the t-shirts to advocate no shame for speaking up against abuse.

“Now, thanks to Black Privilege Publishing, we don’t just read and write—we read, we write, and we publish our own narratives,” said Charlamagne.

Kopacz, whose mother is from the West Indies where Yemaya is celebrated, wrote “Shallow Waters” to bring this deity of the sea to life in a fantasy novel about the power of black resilience, love and feminine strength in Antebellum America.

Anita Kopacz, Zero F’s Given is a campaign to help Center for Safety & Change – Rockland County’s only victim-focused, nonprofit agency offering around-the-clock, free and confidential life-changing programs and services to victims and survivors of domestic violence, sexual assault, human trafficking and all

Zero F’s Given (ZFG) is a campaign to raise awareness and help victimized and disenfranchised populations heal from sexual trauma, find their voice, and reclaim their power. Zero F’s Given launched as a tee shirt campaign to help The Center for Safety & Change, a nonprofit, tax-exempt community organization serving victims of domestic violence, sexual assault, and other violent crimes in Rockland County, New York.

After graduating from the University of Santa Monica with an MA in Spiritual Psychology, I knew I wanted to help people heal from sexual trauma. I was a molested when I was seven years old, and I had spent most of my adult life trying to heal myself. I realized that there were not many women from marginalized communities in the healing spaces that I had joined. I created ZFG to help close that gap.

searing indictment of America’s historical, deadly, and continuing assault on Black lives, STATE OF EMERGENCY will also share Mallory’s trusted voice and inextricable experience—drawn from a lifetime of front line culture-shifting activism, organizing and fighting for equal justice—on how best to continue the country’s onward advancement and momentum toward true equality and social justice.

“This country can’t undo the gross atrocities and inner and outer scars committed against the Black, brown, indigenous, and immigrant lives that were sacrificed for the benefit of its creation, development, and rise,” says STATE OF EMERGENCY author Mallory, “But it is now clear that we, the people, who have toiled, sacrificed and contributed an indelible handprint from the soil to the soul of this nation, will no longer tolerate the continual systemic injustice, inequality, inequity, and indignities against the communities our government never bothered to correct. We’re owed the same American Dream of this nation as those who seek the haven of it. And the time is now.”Charlamagne Tha God (Lenard Larry McKelvey), is a native of South Carolina, where it was once prohibited to teach slaves to read and write. “Now, thanks to Black Privilege Publishing, we don’t just read and write—we read, we write, and we publish our own narratives,” said Charlamagne, one of the most potent, influential, and authoritative voices in media today. Black Privilege Publishing is a safe place where unapologetically Black voices tell their unapologetically Black stories—with freedom, bandwidth, and power. According to Charlamagne, “Black Privilege Publishing is a home for the descendants of slaves impacted by Anti-Literacy Laws to forge stories that our ancestors could only dream of reading.

The Lion Queen | US Against The World