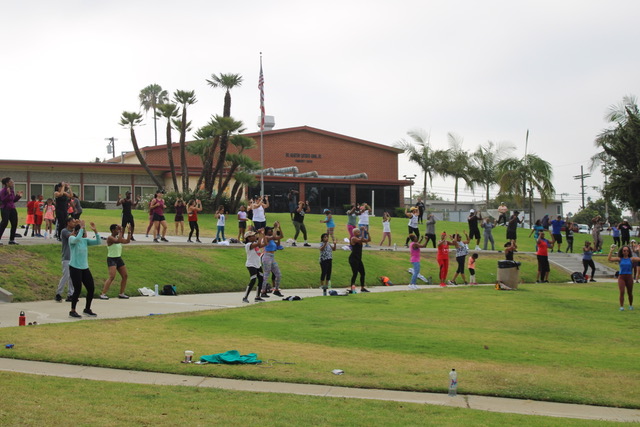 Decades ago, a high-school-aged, grief-stricken Claudine Cooper began to implement physical exercise into her daily routine, and it was at the advice of a therapist. Cooper had just lost a family member to homicide, and healthy coping mechanisms are critical when it comes to managing mental health. To experience such trauma during the formative years of life, in many cases it’s the response that can determine a life trajectory.

At first, Cooper was dismissive of her therapist’s advice on exercise. “I thought that was terrible advice,” she recalls.

But eventually– in the most high-school-aged-kid fashion– after a period of trying things her own way, Cooper surrendered to the professional. “I wasn’t feeling any better, so I decided to try her advice,” she says.

She started taking walks around her urban community of Minneapolis, Minnesota. And friends and family began to join her. Hearing this part seems fitting, because even as she is now an adult, it’s easy to notice her influence and effortless popularity. People seem to flock to Claudine Cooper– like a natural gravitation.

The walks were indeed helping. And they not only helped her, but her loved ones who tagged along also noticed benefits in their own lives.

As teenaged-Cooper dipped her toe into a more fitness-conscious lifestyle, she eventually decided to apply for a job at her local gym, and was soon hired as a front desk employee.

As time went on, the front desk job blossomed into the inevitable, and nearly thirty years later, Claudine Cooper is a beloved fitness instructor in Inglewood.

But how did this midwestern native end up in Inglewood? Pure fate, perhaps. At the age of 18, Cooper left Minneapolis on a whim, mainly because she hated the harsh winters. She made a few stops and took a few detours along the way, briefly living in other cities and states before finally landing in Southern California at the age of 25.

“I didn’t know anything about L.A. I met somebody who lived in Inglewood. They brought me to Inglewood and I was like ‘Boom. This is what I’m talking about. This is where it feels like home. Hard-working people– people who are just friendly and normal.’ I fell in love with this town.”

Soon after setting the intention that she would lay her foundation in Inglewood; Cooper made a friend in a Mid-City hair salon who helped her find the perfect Inglewood duplex to rent. The City of Champions has been her home ever since.

Twenty years later, that duplex is in her rearview. She now lives in a house near the new SoFi Stadium with her husband and children. But her love for the city remains the same.

Time has come and gone, but her devotion to Inglewood holds strong. And her devotion to the people is just as evident. Five years ago, while Cooper was a fitness instructor at the 24 Hour Fitness on Slauson Avenue, she received a Facebook message from a client who was letting her know that she could no longer afford a gym membership. The client briefly mentioned her financial hardship, and that the only thing she was going to miss about her 24 Hour Fitness membership was Cooper’s classes.

From here, the free outdoor classes began. It started with a group of six, outside of The Forum once a week– Saturday mornings at 8 a.m. But that location quickly fell through. The Forum was undergoing renovations at the time, so the premises was closed for safety reasons, among other things. They were told to leave. It was then that the group decided to move their workout sessions to Inglewood’s Darby Park.

At Darby Park, the small group of six began to continuously grow. The word had spread and this free, community-based, outdoor fitness class was now hardly a secret.

Then comes the year of 2020. Gyms everywhere were going dark due to pandemic safety precautions. Nearly 80 people were now regularly showing up for the class at Darby Park on Saturday mornings.

“I had no intention of the workout growing to this magnitude. That was not my plan. I was trying to service someone who didn’t have access to a gym membership,” says Cooper.

For years now, the community has loved and looked forward to Saturday mornings with Claudine Cooper. But, in 2021, feathers have been ruffled– particularly those who live in the nearby homes close to Darby Park.

The pure, well-intentioned, community service that Cooper has been providing to those who perhaps don’t have the luxury of paying hundreds of dollars every month for a personal trainer, has been facing some neighborhood complaints.

According to a small number of nearby residents, the music from the class is just too loud to bear, even if it’s just once a week on a Saturday morning. The City of Inglewood Code Enforcement told her that she could teach the workouts without music. But what’s an exercise class without music?

She recalls what the city official said to her, “You just can’t do this. You’re really disturbing someone. Someone is very upset about this.” It’s hard to shake the feeling that these complaints are actually coming from one disgruntled resident who feels the need to forge a campaign against people at the park who are using the park exactly what it’s meant to be used for: activity.

But Claudine Cooper is nowhere near discouraged. She recognizes the good she’s done, and the people she’s helped who show up to the park on those Saturday mornings. And she knows she’ll continue to help people, even if minor adjustments will need to be made. “We’re in a time now where the squeaky wheel is going to get the grease– the person who’s the loudest. The people who are affected positively, they’re not sending letters to the city. The person who’s upset is the one sending letters every day,” says Cooper.

Saturday, June 19 was the final Darby Park workout. Days before, Cooper announced via social media that city officials had ordered an end to the era, and that the last class would be that upcoming Saturday, June 19.

But the city did eventually come around to a more compassionate approach for everybody involved. After the social media blast, Cooper received calls from city officials vowing to find a solution to the dilemma, assuring her that they would work to keep all parties happy– the people who are positively benefiting from Claudine Cooper’s services, and also the nearby residents. But for the time being, the class at the park did need to end, and other arrangements would be made.

That following Saturday, the last hurrah at Darby Park had a massive turnout. Over 100 people showed up for the class, showering Cooper with love, support and appreciation. Some even brought flowers and gifts.

Chandra Smallwood is an Inglewood resident and long-time supporter of the Saturday class. “I started coming to this workout two years ago. It’s nice that she can bring everyone together. It caters to everyone, it’s great for the community, she’ll invite people that are walking, we’ll meet people. It’s been great to meet people in Inglewood here,” says Smallwood.

Ericah Thomas and her 13-year-old son are also regular attendees. “It’s been amazing– the fact that it’s free, it’s in the community. My son is pre-diabetic, and I convinced him to come with me to this, and now he loves it. Without having this through the pandemic, who knows where we’d be. We appreciate her and love her so much,” says Thomas.

Thankfully, the Saturday morning crew ended up never missing a beat. The city kept their word, and arrangements have been made for the class to resume outdoors on the grounds of SoFi Stadium, Saturdays at 10 a.m.

The class lives on! And therefore, so does the positive impact that it’s brought to the community.

On weekdays, Cooper teaches out of her exercise studio at ‘La Create Space’ in downtown Inglewood, and also at Equinox and The Bay Club.