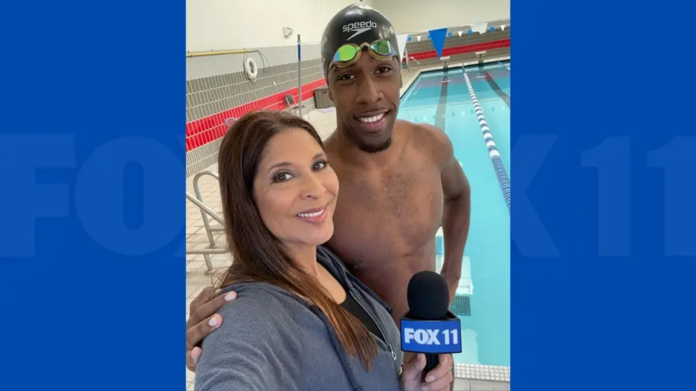 FOX 11 got a chance to speak with Inglewood’s own Jamal Hill.

After the Super Bowl comes another big sports chapter for Los Angeles, the Olympics and Paralympics in 2028.

Jamal Hill is a star athlete from Inglewood who already medaled in last summer’s Paralympic Games in Tokyo. There’s beauty in his stroke, but it’s his speed that got Hill a bronze medal in the 50-meter freestyle. At the same time, he set the American record.

Hill trains at The Boys and Girls Club of Pasadena under coach Wilma Wong of the Swim Up Hill Victors. It was she who noticed that this lifelong swimmer was getting in and out of the pool in a way that suggest a disability was at play.

Hill had been training for the Olympics and hiding a childhood diagnosis of neuropathy, an inherited disorder that causes nerve damage, weakness, pain and a loss of circulation.

Just a few short years later, this 6-foot-4 chiseled athlete would represent Team USA at the Paralympic Games and take home a medal.

Hill says he is now working on a documentary with Angel City Sports. That non-profit is the power behind LA’s paralympic movement and sports for people with physical disabilities, like wheelchair basketball..

Each week in Community Champions, FOX 11 will showcase another grant recipient leading up to Super Bowl 2022 in Los Angeles. For more information on the Super Bowl LVI Legacy Program and the selected nonprofit organizations.

Time to be concerned about how LACOE is running Inglewood Schools

Scammer are active ahead of big game