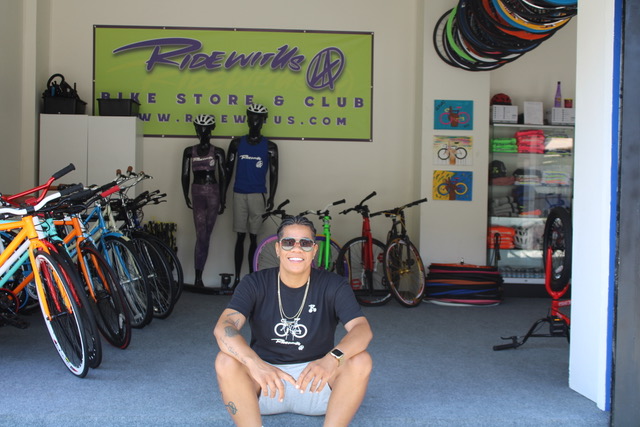 Kellie Hart’s bicycle shop on Slauson Avenue is actually much more than simply a store where one would walk in, buy a bike, and leave. While that is certainly an option, Hart’s vision and purpose is much more.

In 2020, while gyms closed in response to the COVID-19 outbreak, Kellie Hart found a healthy outlet to where she could channel her energy: pandemic-safe, outdoor bike rides. It began with her calling up friends on the phone– “Hey, get up, let’s go ride,” – is all the convincing she needed to do. Like clockwork, the then-small group would meet up and ride their bikes.

“Honestly, I was following a calling. We just kept riding. It was the consistency and just being in tune with the people who were coming to ride with us, and why they wanted to come.”

It turns out Kellie Hart, Los Angeles native and Westchester High School graduate, wasn’t the only one who needed an outlet during the turbulent times of a pandemic. As a former basketball player in both high school and college, she was no stranger to the many benefits of physical activity. But after just a few rides, others were also taking note of the positive impact the rides were making in their own lives. Riders began to express how beneficial the meet-ups had grown to be, and demanded more.

While bicycling through the streets of Los Angeles with this core group, riders found peace of mind, relief of PTSD, and it even helped some cope with abusive relationships and other hardships.

What began as a small group of about six friends and acquaintances meeting for bike rides, has now grown to average about 90 riders each meet-up. On some occasions, 150 riders. And not only that, but ‘RideWitUs LA’ now has a storefront location, which is the starting point of each ride. Rides take place on Tuesdays, Thursdays, and Saturdays, and routes can vary depending on traffic, generally lasting anywhere between 3-5 hours with social stops throughout, such as restaurants and parking lot hangouts.

Hart’s storefront seems to be the ideal location for a bike club. It’s conveniently in the middle of a large, spacious parking lot– perfect for the rapidly-growing club.

“This space– I call this my blessing from God.” Hart recalls that two years ago she tried to purchase this exact space, but for a car wash business that she was considering starting. Real estate pricing was higher than she was hoping for at the time, leaving her unable to buy. But two years later, in a full-circle moment, the opportunity arose for her to sign a lease agreement. And there you have it: RideWitUs LA!

With the group continuously growing, when it comes to leadership out on the road, Hart is fortunate enough to have plenty of help: The ‘Supa 7’.

Made up of Darrnell, Derrick, Kam, Kellie, Mike, Rich, and Tone, The Supa 7 are the crowned leaders of the rides. Operating like a well-oiled machine, each leader knows and is committed to their role out on the road. They’re the core seven who have been there since the beginning of the RideWitUs LA journey.

Curious as to how seven people are able to smoothly be in charge without personality clashes, drama, or just petty disagreements, I asked Hart to elaborate on how it manages to work with seven people in a leadership position, the answer was admirably simple: “It’s not about the role, always about the goal.”

The Supa 7 are never in competition with each other– there are no power trips or enlarged egos. They’re there to uplift one another, always with the common goal in mind, as a family.

“The cohesiveness of our group comes from the passion that we all have. We love being around people, and we love what this community has done for [our riders], but also we love what it has done for ourselves.”