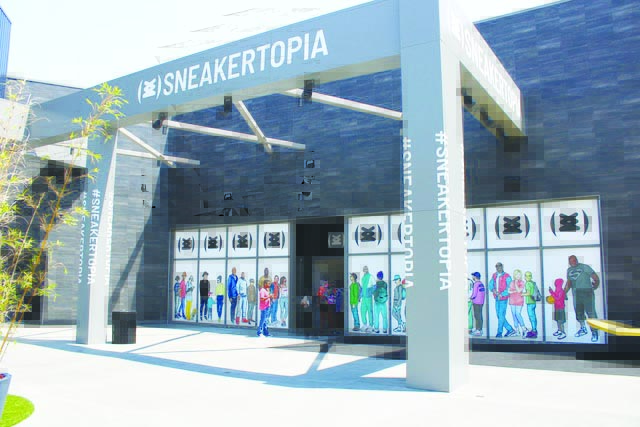 Stumbling into Sneakertopia, especially as a self-proclaimed sneakerhead, was highly satisfying simply from the preconceived idea that I was entering a space dedicated to the art of sneakers. The words “Sneakertopia” written in big, bold letters at the front of a building– drew me in like stagnant water draws mosquitos. Sneaker culture is bursting with historical and present-day significance. They tell stories, and they represent formative moments in our society. Anybody who denies or minimizes the cultural weight of a retro Air Jordan sneaker, is sadly uninformed.

To my pleasant surprise, it didn’t take long after I walked into Sneakertopia for my already-high expectations to be far surpassed. The interactive museum, located in the HHLA outdoor entertainment complex just off of Howard Hughes Parkway, is absolutely the sneaker haven that I had hoped for, showcasing some of the most exclusive, rarest pairs to ever hit the market. But in addition to the sneakers and the tributes to sports legends such as Michael Jordan, Lebron James, Serena Williams, and Tony Hawk– there’s much more to it. Cofounder and CEO Steve Harris walked me through the technology-intertwined, interactive experience of Sneakertopia.

It was the high-tech wall art that blew my mind. The space is lined with murals of some of pop-culture’s most prominent figures such as Nipsey Hussle, Rihanna, Kanye West, Drake, Snoop Dogg, and many more, created by dozens of different artists from all over the world. And it’s with the flash of a smart tablet (which is lent to visitors during their tour) toward each mural, that a brief, relevant video clip will play on the screen in your hand. The technology is immersive, as each individual piece of wall art triggers a different video on the tablet screen. The coding for the app that makes this possible was developed by Harris’s business partner, Steve Brown, and he’s no rookie. Back in 2008, Brown sold a different tech development of his to Apple for more than $100 million.

The tour is undoubtedly educational, as one should expect from a museum. But Harris has also managed to implement waves of nostalgia into the experience. For example: the “child’s bedroom” that you find yourself standing in at one point during the tour. The bed is a large shoe box with a mattress inside. The desk, walls, bookshelves, and carpet are designed as if a severely distracted kid had been doodling on them all day with their colorful set of pens.

“This is that kid that sat next to you in class. That kid that had his sketch pad and was constantly doodling and drawing on his shoes, and was drawing on his pants. He probably was even tattooing with his pen on his arm. You thought he wasn’t focused on what was going on– on what the teacher was doing– but he actually was hyperfocused on what was going on for himself, because he wanted to grow up to design sneakers for the biggest music artists and celebrities and athletes in the industry,” says Harris, as if he was referring to a hypothetical, make-believe character.

I couldn’t help but pick up the hint. “So, is this kid you?” I asked. He smirked. “Possibly,” said Harris. That’s all he gave me on that, which was just enough for me to confidently believe that the kid who occupied this bedroom does indeed represent young Steve Harris– a sometimes misunderstood kid with a dream who now, decades later, has turned that dream into reality.

When it comes to appealing to sneakerheads, Harris and his business partners could have gotten away with simply a room of shelved sneakers. But Sneakertopia took it much further, showcasing the intersectionality of sports, music, film, art, and fashion– and that’s a roster that can lure in every type of person.