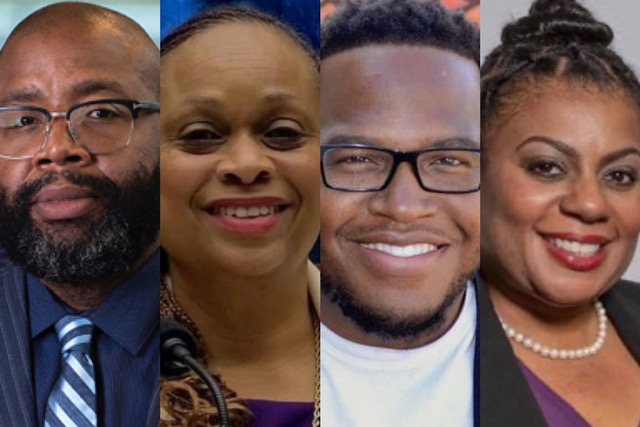 The 11 CLBC lawmakers nominated an individual from their respective districts – people who exemplify selflessness, courage and service, and whose work to lift others often goes unrecognized.

“From our earliest days in the United States, the course of this country’s history has been influenced by African American heroes and pioneers that go far beyond slavery and fighting for our freedom,” said Bradford.

“We have contributed to science, medicine, business, education, government, industry and social leadership,” he continued.

Bradford said he hopes the CLBC tradition of honoring a wide variety of people doing extraordinary work serves as a reminder that “no matter who you are you can create long-lasting change.”

Bradford nominated Dr. Keith Curry, President of Compton College and CEO of the Compton Community College District (CCCD). Curry is responsible for overseeing all departments and functions of Compton College and serves as secretary for the CCCD Board of Trustees. He helped raise $11.3 million to help the school transition to an independent college.

Assemblymember Chris Holden (D-Pasadena) nominated Ray Ealy, founder of STEAM:CODERS. Founded in 2014, STEAM:CODERS enhances the education of  K-12 students in Science, Technology, Engineering, Art and Math (STEAM), preparing them for educational or professional opportunities. STEAM:CODERS recruits students who reside in communities served by Title I schools. Through the program, thousands of students have been introduced to skill-building training.

Assemblymember Isaac Bryan (D-Los Angeles) nominated Cassandra Steptoe-Sampson, founder of A Child’s Dream-CA. The non-profit is dedicated to helping children in South Central Los Angeles — and their families — access resources they need for school and to stay healthy. Under her leadership, the organization has distributed backpacks, school supplies, shoes, clothing, hygiene kits and toys to the families in Los Angeles, and beyond, with the help of sponsors and partners.

Assemblymember Reggie Jones-Sawyer (D-Los Angeles) nominated Dr. John Griffith. Griffith began his career at Los Angeles’ Kedren Community Health Center in 1981, serving as the Chief Operating Officer-Mental Health Services until 2002, when he became the President/CEO. During his tenure at the health facility, he has instituted several changes to help meet the health needs of residents in the surrounding community. Griffith was instrumental in setting up a relationship between Kedren and Charles Drew University, California’s only HBCU. Medical students participate in the project as part of their residency requirements.

Assemblymember Mike Gipson (D-Carson) nominated Dr. Ayanna E. Davis, an advocate for education, political empowerment and social justice. She lives in Compton. Over her 27 years of service in education, Davis’s has touched the hearts and helped to shape the minds of thousands of children. Currently, Davis is the Vice President and Political Action Council member of the Association of Administrators of Los Angeles (AALA). In her role as President-elect of the Southern California Chapter of the California Association of Early Young Children, she advocates for disadvantaged children (from birth to 8 years old).

Earlier this month, Assemblymember Autumn Burke (D-Inglewood), who was a member of the CLBC, resigned from the Legislature, citing personal reasons.

The CLBC honored a nominee from the Burke’s district: Derek Steele, a Morgan State University graduate who started his professional career as an electrical engineer at Northrop Grumman. Later, he began serving his community as a volunteer with the Social Justice Learning Institute (SJLI). His work focused on figuring out how to recreate local food access systems to solve health disparities and food insecurity in Inglewood and nearby communities. Finding service to others more fulfilling than corporate pursuits, Steele was recently appointed SJLI’s Executive Director.