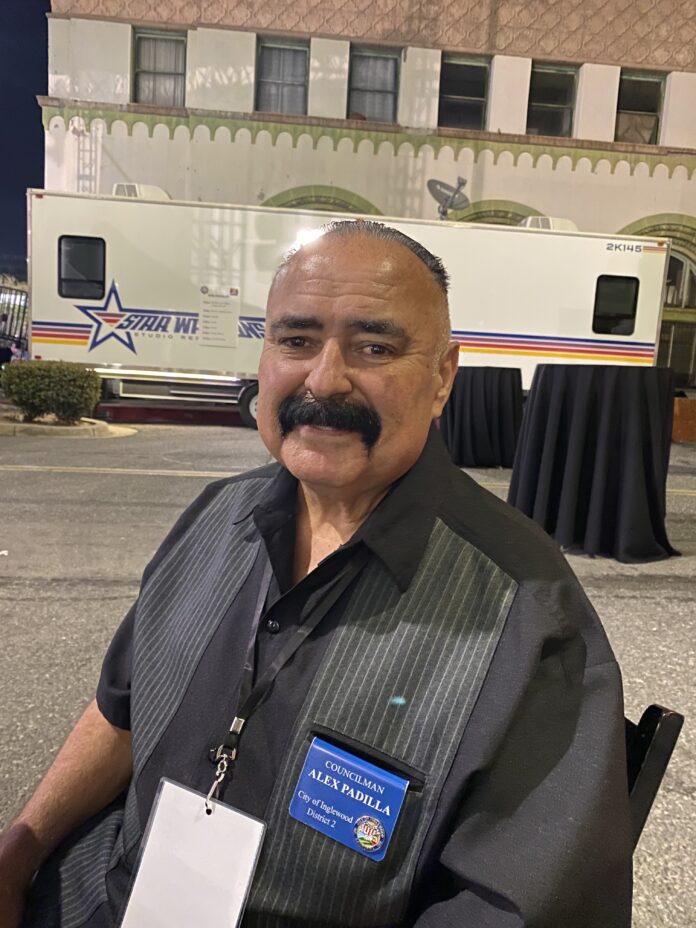 The Rams were going through their final preparations for their eventual big Super Bowl win at SoFi Stadium on Feb. 13, all the while ‘Taste of Inglewood’ was unfolding with its three day block party downtown on Market Street.

‘Taste of Inglewood’ featuring an array of vendors that included food trucks such as Nays Tacos, the Clippers, The Forum, fruit beverages and healthy cream for your skin was the first real event to come out of the COVID pandemic and it did not miss a beat literally.

Inglewood 2nd District City Councilman Alex Padilla was on hand for the three day event that began on Thursday Feb. 10 and concluded at 10p.m. on Saturday Feb. 12.

“‘Taste of Inglewood’ has been going on in Inglewood for three or four years. David Rice is the founder of the event. He’s a business owner here in Inglewood and a long time support of everything we’re doing in the community and he’s also one of our commissioners as well, so he volunteers to work with our city to move everything that we are doing forward and so he’s really committed to bringing entertainment, to bringing folks together to recognize all of the positive things that we are doing in the City of Inglewood,” explained Padilla to Inglewood Today.

He continued; “So, this is a family event and everybody here is having a great time, celebrating all of the good things that are happening in Inglewood, the transition that has taken place just the past five years to now for a city that’s on the move, and again a city that’s recognized as The City of Champions and we are the entertainment district for all of the state of California. We have done more in the last few years that most states have done in generations and you only do that because you get good support from the community and you have strong leadership that believes in a vision and works together to make that vision happen.”

Padilla said that ‘Taste of Inglewood’ was the culmination of a city that believes in each other and is willing to work with each other and he paid great credit to Major James T. Butts, Jr. who’s at the top of the org chart.

“Nobody does anything without surrounding themselves with folks who can help them do the heavy lifting and with the mayor and the council, we are the elected officials and we are the ones that give the direction for the city and at the end of the day it’s about having staff when the rubber meets the road that are out here every day doing good things for our community. We couldn’t do the heavy lifting if we didn’t have a community that supported us and backed us up and believed in what we are doing. Together we all do our part of doing that heavy lifting and Mayor Butts is at the leadership role and you need to have somebody that’s strong that God has blessed with broad shoulders,” Padilla concluded.

In addition to serving on City Council Padilla is also a Special Investigator with the Los Angeles Board of Police Commissioners, Office of the Inspector General, where he is assigned to the Use of Force Section. In that capacity, he oversees the Los Angeles Police Department’s investigations into its most critical and high-profile incidents, including officer-involved shootings, other uses of deadly force, and in-custody deaths.

Inglewood is fortunate to have his talents in public service and just like ‘‘Taste of Inglewood’’ he represents the brightest of the City of Champions.