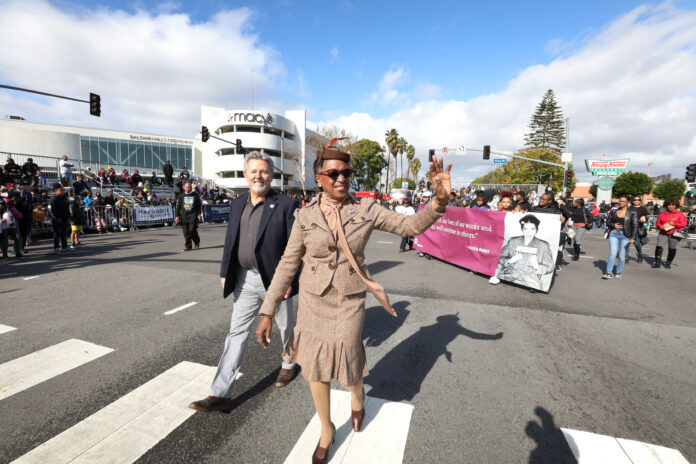 The parade, which celebrates the legacy of civil rights leader Martin Luther King Jr. and was themed “Making America the Last Best Hope of the World”, was held on Jan 16.  As part of the parade celebrations, Metro’s vintage GMC bus travelled the parade route carrying Metro Board First Vice Chair Jacquelyn Dupont-Walker, along with local high school students, community leaders and residents.

“Martin L. King Jr. was one of America’s strongest champions for racial equality who understood the connection between civil rights and equitable transit access for all Americans,” said Metro Board Chair and Glendale City Council Member Ara J. Najarian.  “We encourage everyone to go Metro to take part in celebrating the life of one of the nation’s greatest heroes at this parade, especially since we now have new K Line rail service that will take you directly to the parade route for the first time.”

There were several options for people to Go Metro to the festivities.  For people in South Los Angeles, Metro’s E Line (Expo) Expo/Crenshaw and K Line Martin L. King Jr. and Leimert Park stations are adjacent to the parade route, providing easy access to the parade and post-parade festival at Leimert Park Village.  Riders coming from other parts of Los Angeles County can easily use the extensive Metro Rail and Bus system to reach the area.  For example, the E Line (Expo) connects in downtown Los Angeles with the A Line (Blue), B Line (Red) and D Line (Purple).

“Dr. King’s legacy is best honored when we re-commit to the goals that he fought for and gave his life to achieve for all people. He believed that all Americans must have access to better housing, jobs, public schools and equity,” said Metro Board First Vice Chair Jacquelyn Dupont-Walker.  “It is our time. It is our watch!  Let us be the difference we want to see.”

“With the opening of the K Line last October, residents of and visitors to the Second District now have improved access to the annual celebration of the legacy of Dr. King’s life,” said L.A. County Supervisor and Metro Board Member Holly J. Mitchell.  “Whether you want to avoid traffic impacts and parking hassles or just enjoy L.A.’s newest rail line through the heart of the Crenshaw District, riders can Go Metro.”

At the post-parade festival in Leimert Park, Metro hosted a booth offering information to attendees about the agency’s reduced fare programs, including GoPass,  a two-year pilot program that provides unlimited rides for K-12 and community college students and the Low-Income Fare is Easy (LIFE) program, for qualified L.A. County residents.

“In the spirit of Martin Luther King Jr., Metro is focused on providing greater equity for all our customers,” said Metro CEO Stephanie Wiggins.  “This includes the K Line, our latest rail line to serve the historic core of the African American community.  This line opens access to not just this parade route but all the local destinations in the Crenshaw Corridor and beyond.”