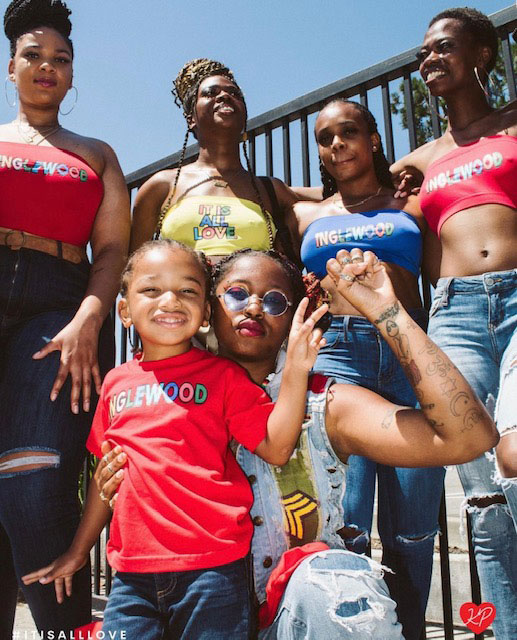 She landed on the idea of collecting canned foods for local families in need– and it began on Twitter.

She sent out the tweet, something along the lines of, “Inglewood area, I’m collecting canned foods to donate to families in need.” The response was far beyond anything she could have ever expected. Canned goods began flowing in. Families in need would connect with Parhm to arrange food-pickups, and the rest she transported to Inglewood’s St. Margaret’s Food Distribution Center. At the same time, she circulated neighborhoods, traveling door-to-door seeking additional donations.

Not only was Parhm’s first act of community outreach a major success– but also, an internal fire had officially been ignited. Why stop now?

“And then I thought, this doesn’t have to be a one-time thing. I can do this for as long as I need to, until my people are good. It helped me realize that you don’t actually need to have everything, to be able to give back.” Parhm’s passion for helping her community only continued to grow, and she knew there was more work to be done.

The success of this on-a-whim canned food initiative led to the formation of Kaitlyn Parhm’s organization, Inglewood’s Helping Hands. The mission is simple and to the point: Help Inglewood families. The intention has always been to be a resource that families can lean on during hardship – whether by raising money, collecting food, cultivating community, or any other ways to uplift the community that Parhm credits to raising and shaping her.

Currently, Kaitlyn Parhm is a student at California State Dominguez Hills, double majoring in Psychology and Africana Studies. But her journey to this point of where she is now is a testament to how well-rounded she is.

But one day, an exciting and seemingly-out-of-reach opportunity presented itself: The opportunity to participate in NASA’s Summer Research Program at Edwards Air Force Base. Parhm’s math professor at El Camino College encouraged her to apply for the program, and even wrote a letter of recommendation. Parhm was accepted into the research program.

From working with NASA, to starting and operating Inglewood’s Helping Hands, Kaitlyn Parhm has done more than most, especially when considering her young age.

As she finishes her degree in Psychology and Africana Studies, her presence as an anchor for the Inglewood community still remains a top priority, especially through the pandemic, which has disproportionally affected communities of color.

Those who wish to offer support to Inglewood’s Helping Hands can purchase stylish t-shirts and sweatshirts on the organization’s website. The proceeds go towards Parhm’s continued efforts of helping Inglewood families in need.

When Parhm finds the time to decompress – because even community superheroes need down time– you can find her hanging out on Market Street, taking photos with friends, and spending time with her sister who’s also her next-door neighbor. As California is beginning to return to a sense of normalcy, she looks forward to returning to amusement parks.

Kaitlyn Parhm and Inglewood’s Helping Hands is an example of how small steps of action, such as sending a simple tweet, can blossom into life-saving affects. We all hold the power to step outside of ourselves to make a difference.

On the Record with Governor Newsom: One Year of California for...