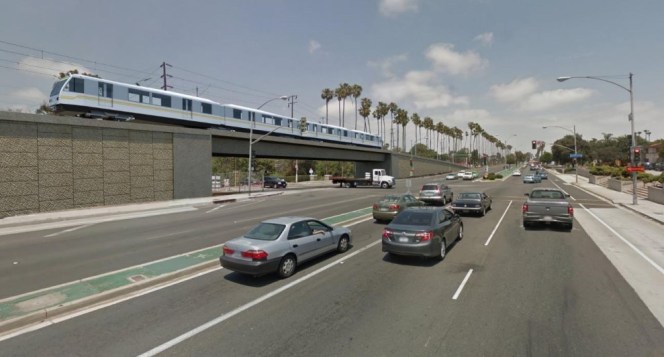 The Crenshaw/LAX rail is a $2 billion, 8.5-mile light rail line extending from the Expo Line’s Exposition/Crenshaw station to the Green Line’s Aviation Station. The line primarily follows Crenshaw Boulevard up through the heart of Los Angeles’ Black communities. Portions of the line are elevated and underground, though much of it will run at-grade.

When Crenshaw/LAX line construction got underway in early 2014, the line was anticipated to open in fall 2019. In late 2018, the expected opening date was pushed back to June 2020. Last month, a Metro letter and committee discussions pointed to an opening date around mid-2021.

The L.A. Times reported on numerous Crenshaw construction issues leading to the delays. For his part, Metro CEO Phil Washington has been alluding to a likely “liquidated damages” lawsuit.

Tomorrow, the Metro board Construction Committee will consider approving $120 million in Crenshaw cost overruns. That would include $90 million for the current contractor and $30 million for later close-out costs. That item was scheduled to be approved last month, but proved too contentious.

In December, the Metro board approved an initial Crenshaw rail operations plan that favors wealthier, whiter South Bay commuters over South L.A. residents who live along the line and who actually ride transit.

Today, the board’s Planning and Programming Committee approved an item to move forward with adding a new grade separation at Centinela Avenue in Inglewood. The Centinela grade separation is championed by James Butts, the Mayor of Inglewood and current Metro Board Chair.

The new grade separation is not a mega-project. It would be statutorily exempt from lengthy environmental review under the California Environmental Quality Act (CEQA). Metro’s rough estimated cost is $185-241 million – up from an early estimate of $100-150 million. The project currently has no funding. Metro CEO Phil Washington stated that the agency is working with Inglewood and the South Bay Council of Governments to determine how to pay for the project. Washington anticipated returning to the board with funding plans this Summer.

Construction is anticipated to begin about a year from now – roughly the same time as the Crenshaw Line is expected to open.

If this grade separation project moves forward, which appears likely, it will adversely impact transit riders.

There are a few alternatives currently under consideration. These are outlined in Metro’s screening analysis study.

For an estimated $200 million, transit riders would have to endure a roughly two-year long partial closure, taking a bus bridge between Crenshaw’s Fairview Heights and Downtown Inglewood stations.

For an estimated $241 million, the project could include shoo-fly tracks that would minimize disruption to transit riders. The tracks would occupy several lanes of Florence Avenue and construction would take longer. Some bus bridging would still be needed when the rail line switches to and from the shoo-fly.

The Crenshaw Line will also connect to the LAX’s under-construction people mover. That connection is expected in 2023.