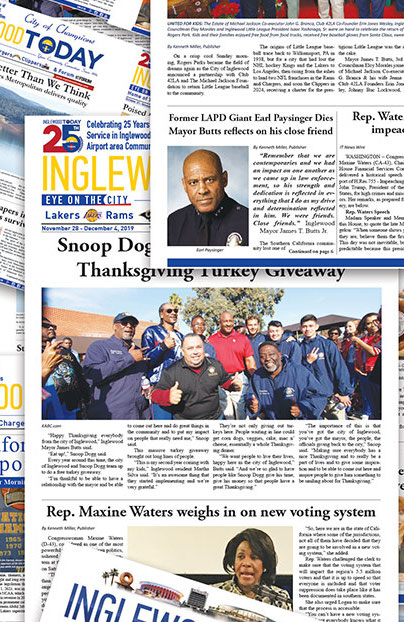 For more than a quarter of a century one man staked his money and his reputation on the City of Inglewood.

He had decided that it was paramount for a publication to born that was reflective the institutional good. The children despite their circumstances exceeding in classroom and demonstrating good character deserved notice. Holding the fire to the feet of elected officials who were delinquent in their responsibilities of carrying out their duties, and then praising and recognizing those who advocated and legislated on behalf of Inglewood citizens.

Many had scoffed when Willie Brown shelved a lucrative advertising and marketing career to do the unthinkable and launch a newspaper in what was then a high poverty and gang infested Inglewood.

However he did so against many who had deemed it not to be a good business decision, but it was an outstanding moral choice.

Now we stand, still printing on a weekly basis and memberships with two of the nations most prominent media associations the National Newspaper Publishers Association and California Black Media.

A lot has transformed the media industry during the past quarter of a century. A social media craze and information hording search engines such as Google and Facebook and a rash of blogs, websites and video streams parading as news or media outlets.

As a result many newspapers have outright folded or were purchased with the intent of being shuttered from communities that relied on them for the primary source of truth and information.

Today we rely more on a tweet or a post than we do on our bedrocks of fundamental resources that community newspapers such as Inglewood Today provide.

Throughout the nation we have witnessed the impact of these click bites and how they have brought about harm to members of our communities and floated baseless rumors that have destroyed the professional lives of some of our most trusted servants.

In Stockton, a massive four-year disinformation campaign cost young rising political star Michael Derrick Tubbs his job as mayor. False and misleading statements circulated on Google and Facebook led to his demise that could have been prevented if the city would have invested in a community newspaper for its constituents.

While we are in the grips of a COVID pandemic that has killed us by the hundreds of thousands, and crippled the way we shop, eat, live and learn it is time for us recommit our efforts to the community organization that has been with us throughout all of this.

Members of Congress, state and local officials, businesses and sports teams it is incumbent upon you to step up and extend the necessary resources to grow Inglewood Today.

This is not a plea for help, it’s an olive branch of good will so that we can get move forward in continuing to separate truth from fiction, rumor from innuendo and provide a record of documentation that last longer than a tweet or post.

We owe it to each other to invest the money and resources to allow for our children to be recognized for the good they are doing, to promote the goodwill of our local business and public servants while personalizing the relationships with the players and executives of our sports teams so that our citizens see them beyond the final score of a game.

The time for minimal input and empty talk is over, so let us redouble our efforts while the eyes of the world are focused on our shinning city.

Inglewood is up to a whole lot of good and as Mayor Butts says making history every day and we need to chronicle it.