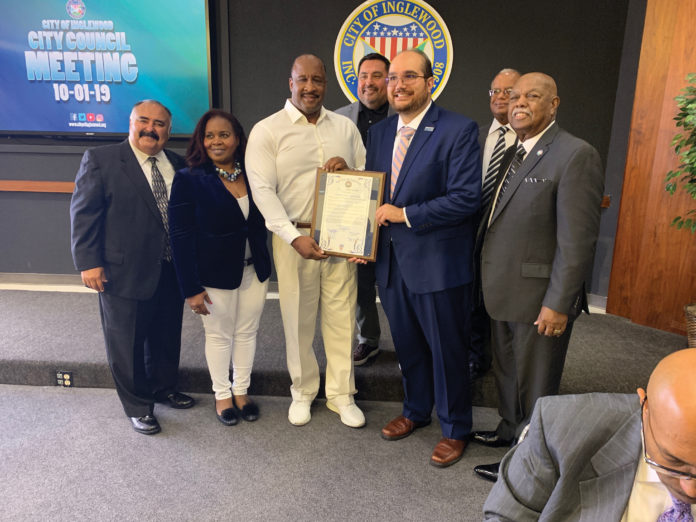 Mayor Butts opened the weekly city council meeting with a resolution acknowledging the city’s commitment to California Clean Cities Day. A representative from the Coalition for Clean Air, whose primary purpose is to ensure that people understand what actions individuals may take to mitigate climate change and improve air quality, thanked the City and the elected leadership for their commitment to environmental issues.

The council approved Amendment One to Agreement No. 19-155 with Nossaman, LLP increasing the contract amount by an additional not-to-exceed amount of $300,000 for payment of legal services.

The council adopted a resolution ratifying the appointments of Glenn Mitchell, Jarmene DeArmas, Jeremy Diaz, and Susan Senior to the South Bay Workforce Investment Board.

The council awarded a contract and approved an agreement with Aldridge Electric, Inc., for the ITS Phase IV-B Project, per Bid No. CB-19-13; an agreement with Housing Rights Center (HRC) to provide fair housing counseling and housing discrimination services for Fiscal Year 2019-2020; and an agreement with Juan Martin Correa dba M-Co Electric, to perform various electrical services throughout Parking Garage No. 2.

During the public comments, citizens congratulated Senator Bradford for SB 206; acknowledged a well-attended and successful Human Trafficking event and a performance by the Los Angeles Philharmonic Orchestra at Morningside High School, and acknowledged a successful 5K Run Walk Event.

Member Dotson thanked everyone who contributed to a successful Run Walk Event, with special recognition to the Parks and Recreation Department and the community for their support.

Member Franklin congratulated his colleague for the Run Walk Event and thanked D-4 residents for supporting the town hall meeting.

Mayor Butts said he was inspired by the very successful Run Walk Event as well as the LA Phil concert at Morningside High School. He closed by saying that history is being made in Inglewood every day.

This Inglewood-based charter company is providing group travel at its finest:...