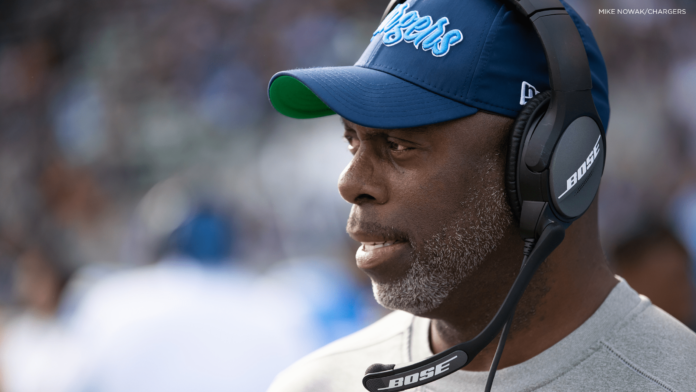 With the virtual offseason concluding this week, here are three takeaways you may have missed from head coach Anthony Lynn’s final press conference until the Chargers reconvene next month for training camp.

“It’s time to speak up and stand for something”

Over the last two weeks, Lynn has been “hitting the pavement” in response to police brutality and systemic racism in the United States.

“It’s time to speak up and speak out and not be silent about this anymore,” he said.

As a starting point, Lynn joined in a protest in Huntington Beach on Sunday, May 31.

Two days later, he participated in a powerful Q&A with the Los Angeles Times detailing his personal experiences with the police and calling for change.

On Tuesday, Lynn said he spoke with Los Angeles County District Attorney Jackie Lacey about her agenda. They also discussed other topics, including police reform.

He’s had conversations with police officers – who reached out to him – about holding fellow officers accountable for their actions. Lynn even brought in a judge to speak with his players, which he said sparked the importance of voting in local elections.

“I believe I have a responsibility to help my community wherever I’m at, and just to help people in general,” Lynn explained. “Like I said earlier, it’s time to speak up and stand for something. What’s going on in our country right now has been going on far too long.”

Football is consuming, but Lynn said it would be disingenuous to say the team’s priorities haven’t changed over the last two weeks. Black players have opened up to their coaches and teammates about their experiences with the police, which Lynn said “shocked” some of the white players on the team.

“I believe our team is closer now, and we just took a negative and turned it into a little bit of a positive for us because I believe it’s brought us closer together,” he said. “We have a better understanding of one another, and when they do get back together then I think that’s when you’re going to see the chemistry with our team.”

Wrapping the virtual offseason on a high note

In an unconventional and unprecedented offseason due to the pandemic, Lynn said he and his staff maximized their time together with the players despite not being on the field.

“I thought the virtual meetings were outstanding,” he said. “We had a lot of them. … And so, our participation has been outstanding. Our coaches have been very creative in installs, and I feel like we got the most we could out of that without seeing the guys.”

Veteran Tyrod Taylor, rookie Justin Herbert and second-year player Easton Stick make up a new-look quarterbacks room in 2020. Lynn explained that while it’s difficult to properly evaluate the position without practices, he knows what he has in Taylor having worked with him in both Buffalo and Los Angeles.

“Thank God I have some time on task with Tyrod Taylor, and he understands the offense that I want to run and what we’re going to do,” he said. “And so, I’m very comfortable about that.”

Taylor has 46 career NFL starts and was a 2015 Pro Bowl selection for the Bills when Lynn was the assistant head coach.