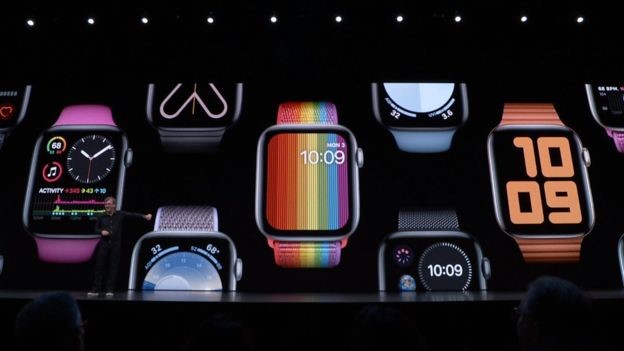 Apple CEO Tim Cook recently delivered a keynote at Apple’s Worldwide Developers Conference, where thousands of coders and creators the world over are convening for a week of tech sessions, labs, consultations, and guest talks. Cook announced some brand new features coming to the Apple Watch and iPhone, as well as a brand new Mac.

In addition to a bunch of new beautiful apple watch faces, there are some awesome new apps coming to watchOS 6, the latest Apple Watch software. There’s an audiobook app for Apple Books, a calculator app (which lets you calculate how much to tip or how to split the bill), and, perhaps most excitingly, a new Voice Memo app for the Watch, which lets you record notes whenever, wherever. There are also some new health and fitness features. Plus, you can track your fitness activity more comprehensively than ever.

Dark Mode is officially coming to the iPhone. iOS 13, the new operating system will include a dark color scheme display, like the one already available on Mac. Also, when you text in Dark Mode, you can swipe to type rather than tapping keys. Reminders is getting a much-needed facelift, too, with a new Quick Type bar and integration with Tasks. Also, you can tag one of your contacts in your reminders.

And when it comes to apps, Apple is putting a major emphasis on security and privacy. And finally, with Memoji, you can add a ton of more makeup and accessories to make yours look even more like you.

Siri can now read your Messages to you as soon as you get a text. There’s also a new audio share feature that allows you to share a song you’re listening to with a friend and Siri’s voice is now more natural-sounding than ever.

The introduction of the most powerful Mac ever created was announced. The Mac Pro was designed with professional creators and developers in mind, to support projects that require major bandwidth like production rendering, virtual instruments, and app simulation, with impressive Final Cut and Logic integrations. As part of Mac OS Catalina, the new software powering Mac, Apple is kicking iTunes to the curb in favor of three separate apps: Apple Music, Apple Podcasts, and Apple TV. And now, as part of Catalina, there’s a new feature called Sidecar lets you use your iPad as a second display for your Mac. Find My iPhone is getting an update, too — the new Find My feature lets you locate any device, even if it’s offline and sleeping. And to combat devices being stolen, there’s a new and very robust Activation Lock that keeps thieves from getting into your Mac.

Now is the time to upgrade!