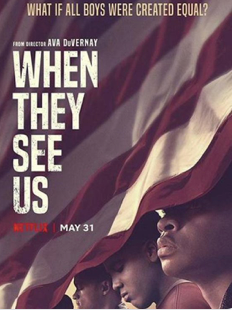 Netflix’s finally dropped its highly anticipated new mini-series, When They See Us, Led by the direction of Compton’s own, Ava Duvernay.

The series proves to be a heart-wrenching tearjerker while Ava takes us on yet, another an emotional roller coaster while reexamining the botched investigation and false conviction of the 5 black and latino boys (Antron McCray, Yusef Salaam, Korey Wise, Raymond Santana, and Kevin Richardson) who were fallaciously accused and convicted of the assault and rape of Trish Meili, a 28-year-old white woman who was jogging in New York City’s Central Park in April 1989. The boys soon came to be known as the highly publicized “Central Park 5,” and although all five were exonerated and had their convictions vacated in 2002 after the real rapist came forward, they unfortunately had already served between 7 and 13 year sentences. They Antron McCray, Yusef Salaam, Korey Wise, Raymond Santana, and Kevin Richardson eventually received a $41 million settlement from the city of New York in 2014 and even though DNA found at the crime scene did match the man who would later confess to raping her after behind bars, the American Justice System hasn’t been moved to technically convict him of the crime due to statute of limitations laws. Ava continues to display her love of story telling (Selma, 13th), and she has ruffled more than a few feathers along the way. At the time of the brutal assault, President Trump was a high-powered New York real-estate mogul and adamant about crime fighting. Although no DNA evidence connected the boys to the attack, Trump spent $85,000 on full-page ads calling for their executions in four city newspapers. “BRING BACK THE DEATH PENALTY. BRING BACK OUR POLICE,” the ads read, with a first-person Trump article accompanied. “I want to hate these murderers and I always will. I am not looking to psychoanalyze or understand them, I am looking to punish them.” Although DuVernay made a deliberate choice to keep his presence to a minimum, the actual papers and news footage of Trump, are shown throughout the second episode.  In response, he tweeted, “The Central Park Five documentary was a one sided piece of garbage that didn’t explain the horrific crimes of these young men while in park.” Apparently Linda Fairstein, the lead prosecutor in the Central Park Five case isn’t feeling what the series had to offer about her either. She calls is, “A basket of Lies!” Once the series dropped this weekend, a social media campaign started trending called, #CancelLindaFairstein. And although Fairstein is now a popular novelist, the backlash from social media has forced her to deactivate all her accounts. She has always stood by the initial verdicts, but that didn’t stop her from stepping down from multiple boards after the series dropped last week. Fairstein resigned from the boards of the nonprofit Safe Horizon, Vassar College, God’s Love We Deliver and the Joyful Heart Foundation, The Hollywood Reporter noted. It’s no surprise that Ava does a phenomenal job with When They See Us, as she continues to prove through her raw talent that she is a Power House in Hollywood.