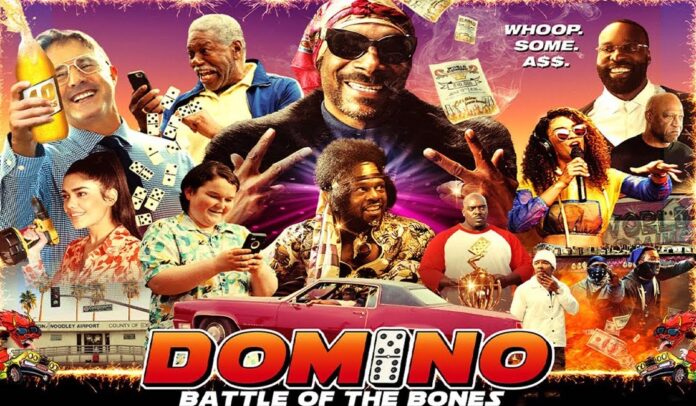 Growing up in South Central Los Angeles former NBA star Baron Davis is a living example of beating the odds, so it is not lost in irony that his first film as a director would offer a collective sense of purpose on urban culture and a table game that is synonymous with it, dominoes.

Davis starred at Santa Monica Crossroads, a prestigious private school that if not for his hoop exploits, he would have never got in, and was named Gatorade Player of the Year before landing at hometown UCLA after an intense recruiting battle.

Selected as the No. 3 pick by the then Charlotte Hornets in 1999 NBA draft he went one to play 14 injury plagued years in the NBA, including stops with Golden State Warriors, LA Clippers, Cleveland Cavaliers, and New York Knicks. By all means he was a fantastic player who often found himself playing for bad teams.

However, it is what Davis has doing after his playing career that is separating him from most retired athletes.

On June 11 he will release his first film starring the transformational Snoop Dogg and renown actor David Arquette in the hilarious comedy Domino: Battle of the Bones.

Domino is Davis’s directorial debut (it was co-directed by Steven V. Vasquez Jr. and Carl Reid), and tells the story of a competitive domino player from Compton (Lou Beatty Jr.) who finds out his nerdy step-grandson is a pro at dominos. The two set aside their differences and team up to win the World Domino Championship.

“What you know about them bones?” Beatty asks his step-grandson Andy.

However, they aren’t the only ones who have tricks up their sleeves. The two have to compete against the best of the best from every block in order to win the $10,000 grand prize.

The TriCoast Entertainment film will open nationwide and the trailer has already received rave reviews.

Davis lends a new face to an antiquated industry that has been marred by racial inequities and starving for authentic urban stories that does not diminish Blacks.

As creative as a dazzling point guard, with dizzying speed and acrobatic athleticism, he has demonstrated to be imaginative in the film industry.

Among the goals for marketing and promoting the film is a potential partnership with the National News Paper Publishers Association (NNPA), the leading body of the Black Press in America.

Davis has reached out to NNPA Chair Dr. Benjamin Chavis and received a welcoming and warm response from Chavis.

That in and of itself is more than Hollywood has ever done, although Black have by and large been the economic engine for the industry.

Davis is acutely aware of that and with the power in his hands is aiming the change that.

During his years in the NBA, Davis was constantly listening, learning, networking, and connecting both on the court and off which ignited a successful post-NBA business career.  Through the process of being his own agent, he fast-forwarded in the role of being a business owner. He decided to use his platform and the knowledge he gained to support others by investing and funding entrepreneurs and start-ups that he believes in, including those created with a purpose to impact society and encourage change. Davis has also become an outspoken advocate for financial literacy and ed-tech and VC leaders from underrepresented communities.

Davis continues to see opportunities and gaps in several industries and where he can’t find companies that fill those gaps, he creates them. He is the founder of several companies, including Sports, Lifestyle in Culture (SLiC), Business Inside the Game (B.I.G.), UWish, and LAUNFD; each with the objective of combining creative talent with original publication and production to develop and provide educational and empowering stories that appeal to global audiences of all ages.

Davis also served as producer of several acclaimed documentaries including “Crips and Bloods: Made In America,” “30 for 30: Sole Man,” and “The Drew: No Excuse, Just Produce.” With his production company No Label, Davis was the executive producer of the Hulu Originals show, “WTF, Baron Davis” and he directed, wrote and stars in the upcoming comedy, “Domino: Battle of the Bones.” Davis can be followed online via Linkedin, Facebook, Twitter and Instagram.