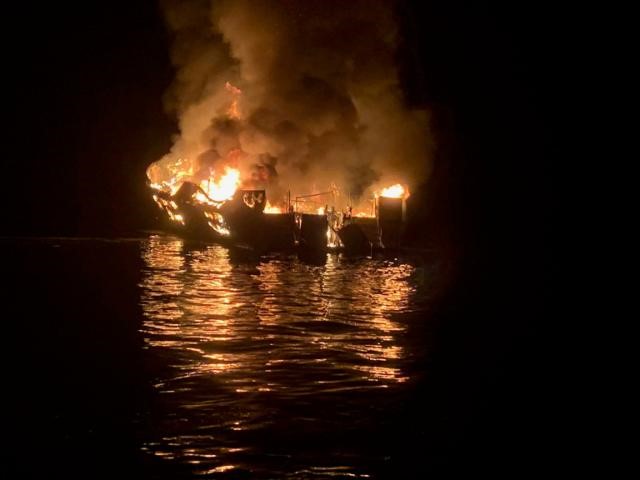 Four bodies have been recovered and a further four identified on the ocean floor following a fire on a diving boat off Santa Cruz Island, California.

Lt Cmdr Matthew Kroll of the US Coast Guard said the bodies were found close to the wreckage of the Conception, which caught fire in the early hours while 33 passengers were asleep below deck.

He said the bodies showed injuries consistent with drowning.

At least eight people are confirmed to have died. A further 25 are still unaccounted for.

The 75ft diving boat caught fire off the north coast of Santa Cruz Island. Rescuers reached the scene at 3.28am local time.

Five crew members who were on deck at the time were rescued by a passing boat, the Grape Escape.

It was initially thought there were 34 people trapped on board but that number was later corrected to 33.

Lt Cmdr Kroll told CNN that “there could still be people out there so we’re still searching” but said that the more time passed the less chance there was of finding people alive.

He said: “We don’t know if it was an explosion or a fire that slowly grew. Everything happened quickly enough that people could not get off the ship.”

The search was being carried out by boats and helicopters, with dive teams arriving on the scene shortly, he said.

Part of the mayday call made by the captain of the Conception has been released, in which the dispatcher can be heard asking: “Can you get back onboard and unlock the boat?”

He can also be heard asking: “You don’t have any firefighting gear at all? No fire extinguishers or anything?”

The captain’s answers are indistinct in the recording.

The Conception is thought to have been on a three-day diving trip which had been due to finish on Monday afternoon.

The US Coast Guard said it had dispatched ”multiple rescue assets along with assets from local agencies” in an effort to save the people on board, arriving at the scene 14 minutes after being alerted.

There are hopes that some of the passengers may have been able to get off the boat and been able to swim to shore. The boat is believed to have been anchored not far off Santa Cruz Island overnight.

The vessel sank in about 54ft of water about 60ft from shore although a portion of its bow was still above water.