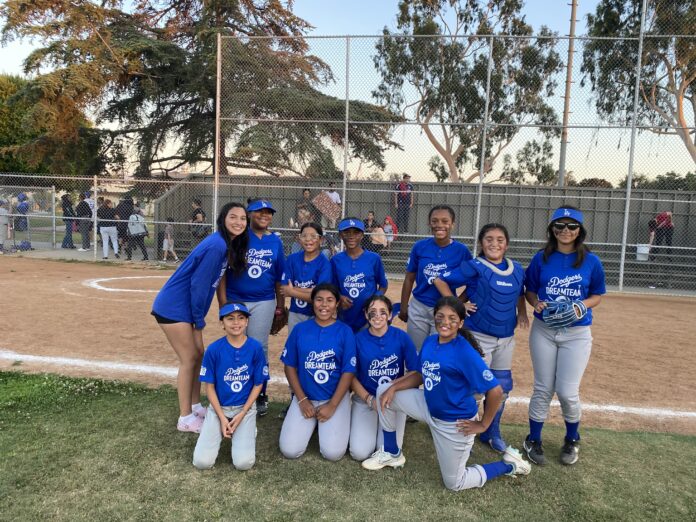 It all began on a clouded day in May when many beginning softball and baseball participants ranging from ages 9-18 put on their Dodgers Dreamteam blue practice uniforms at Edward Vincent Park and Rogers Park in Inglewood.

Then over the next dozen weeks, after taking their first swings and making their first putout the annual Dodgers Dreamteam league will reach its epic conclusion on Aug. 27 at Darby Park when three champions will be crowned in the minors (9-10), majors (11-12) and Juniors 13-15 baseball divisions.

Funded by the Los Angeles Dodgers Foundation, the Dreamteam League is in essence a reflection of the Dodgers past with the names of former greats such iconic Jackie Robinson, Steve Garvey, Bill Russell, Dusty Baker, Eric Davis, Darryl Strawberry, Bill Russell and present superstar Mookie Betts comprise all of the team’s name.

A week of awards banquet at Shakey’s Pizza on Arbor Vitae where the participants all received awards presented by their coaches or veteran sports coordinator Brian Browning provided the tasteful ending.

This Saturday at 10am undefeated Kirk Gibson (8-0) will take on Fernando Valenzuela (7-1) for the minor championship. Valenzuela is coached by veteran volunteer and Field Champion, Inglewood native Blair Harvey, arguably the most passionate mentor around.

Then at 11a.m. Gary Sheffield (7-1) will meet Mike Piazza (6-2) in the majors title tilt, followed by Ron Cey (4-3) and Tommy John (3-4) in a No 2 seed vs No. 4 seed match where the No. 4 seed Tommy John knocked off the No. 1 seed Mookie Betts, a team comprised of older varsity players from Morningside High School.

Parents of these exuberant participants navigated a humid summer by sandwiching the development league between vacations while the returned to school stared them down like a couple cowboys in a saloon.

All of this in a city that the Super Bowl Champions play, an NBA team is on the way, while in the shadows is the promise of hope being filled by the Champion Dodgers, inspiring generations of next– right now!

Inglewood Game Changer – Highlighting One for All