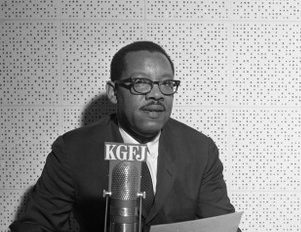 “I hope that I live to be 100 years old and that you live to be 101 so that I may never see good people like you pass away.” Brad Pye Jr.

All I have, I would give not to be writing that Brad Pye, Jr. has ‘Switched Reels’ and left earth for heaven, but it is a responsibility that I will humbly accept with honor.

I remember like it was yesterday, when Brad asked me to come and work for the Sentinel in 1977.

Soon to be graduated from Fremont High School, I felt I had a few options. I had been accepted to Cal State Northridge, and had fleeting dreams of going to the Columbia School of Broadcasting.

However, before I could even utter what my plans were, Brad insisted I would learn more at the Sentinel than I would at any college, as a sweetener he’d make me the next sports editor.

He was right, and I did learn more at the Sentinel than I would have at college, but that’s because Brad was the teacher. I learned about culture, civil rights, dedication, loyalty and discipline.

Brad was the sports editor at the time, so you know I did not get that job.

I’m a kid who grew up in a broken home in South Central, one of seven siblings raised on welfare to a single mother, but Brad did not know that.

Nor was I aware of his journey to Los Angeles from Plain Dealing, Louisiana. I’d never heard of the place, but would soon learn that this is the place Brad made famous.

My life since very early childhood was consumed with wanting to be a sports announcer. I studied the likes of Chick Hearn, Vin Scully and Dick Enberg, but when I met Brad I wanted to be exactly like him.

Little did I know that decades earlier and 1,651 miles away in Plain Dealing, Brad was just as, if not more consumed and committed to pursue his dream to become a journalist and broadcaster.

God brought two dreamers together at an opportune moment in 1977.

Here was The Brad Pye, Jr. and I, a wanderer in desperate need of a guiding light, one that aims the beam of hope from despair to glory.

When I think about it, Brad was planting a seed in me for a legacy that was just halfway complete.

He was not preparing me to carry it, because that would be too huge a burden.

I couldn’t fill Brad shoes. NO ONE CAN. NO ONE EVER WILL.

They say great point guards like Magic Johnson could read three to five plays ahead, well Brad Pye, Jr. was seeing three to five decades ahead.

He took the task of chronicling the accolades of Black athletes in high school, influencing college recruitment of those athletes and ultimately forced the hand of professional sports leagues to drafting of those athletes.

Back in those days television was void of Black sportscasters, so in essence Brad was sort of like a powerful network. He had the ability to influence through radio and newspaper during an era when there was nothing else.

And boy did he influence. With famed criminal attorney Charles E. Lloyd as his close ally, Brad had locked in relationships with the most prominent politicians and was buddy buddy with Raiders owner Al Davis.

Brad had a steadfast belief in Black people and was sincerely committed to uplifting young people. I believe that he had hand in the Coca Cola Bottling Company of Los Angeles sponsoring the annual Watts Summer Olympics.

I know for a fact that it was Brad who convinced Golden State Mutual Life Insurance to cut the check for the annual Victory Banquet honoring high school basketball champions.

Perhaps his greatest gift was to groom people to survive independent of him, including his family.

He never spoke the words that he loved me, but his actions demonstrated that.

He would pay well for services rendered, but scowl if you had your hand out. He may not turn you down, but you would not be enthusiastically running back for another loan.

One of the last times I saw Brad, I had come over to the house to see him. His granddaughter let me in.

Upon entering the room, he asked for the TV to be turned on. I notice that he didn’t have on his eyeglasses. He said someone had taken them to be fixed, and not happy that it was taking so long. I knew how much it meant to him to watch television and especially read the newspaper.

So, I told him I would go and buy him a pair. He obliged, and whispered, “Bring me back a six-pack of Coke.”

It wasn’t until I returned with the glasses, that I was told he wasn’t supposed to be drinking Coke.

I was just glad to help Brad see.

After all where would I be if Brad could not see?

Brad was not a very fast runner on the track team at Jefferson High School. He’d often quip that he was the slowest on the team.

Life is not a race you have to run fast. Usually those out the gate quickly, also stop abruptly.

Brad ran a very long race in life. It was a beautiful journey, some twist and turns but overall a race decorated to the brim with monumental historical accomplishments.

His rest in heaven is well earned