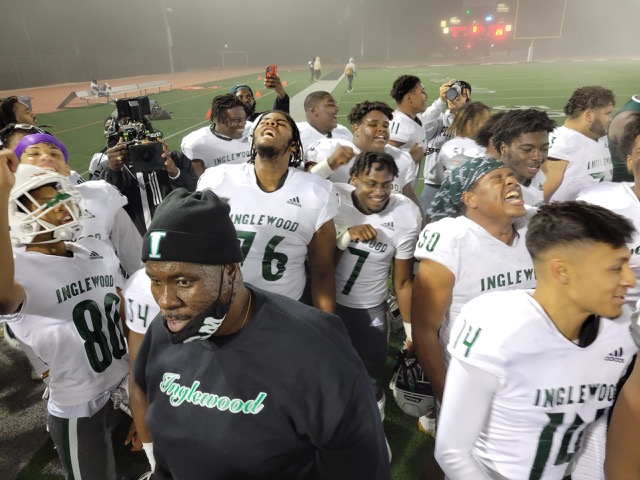 After chaotic week that brought Inglewood High School football team nation attention for all of the wrong reason, the Sentinels put all the criticism behind them and polished off No. 5 seed St. Bonaventure 26-10 at Ventura College in the Division 2 CIF-SS playoffs on Friday.

Loaded with nine Division-1 players and led by their brilliant head coach Mil’Von James, the Sentinel defense stymied the Seraphs star running back Delon Thompson, keeping him under 100 yards on a foggy chilly night. He finished with 98 yards in 22 carries.

The defense knocked out the Seraphs quarterback in the first quarter  and was led by linebacker Taariq Al-Uqdah and two way star junior Jamari Johnson, who had two first-half sacks and caught a 60-yard pass from UCLA bound quarterback Justyn Martin was more than enough to improve to 9-0 on the season.

Sentinels stary running back Tomarion Harden who is also headed to UCLA rushed for a game high 132 yards on two carries to help the offense overcome two Martin interceptions.

Next week Inglewood will host 6-3 Edison at El Camino College.