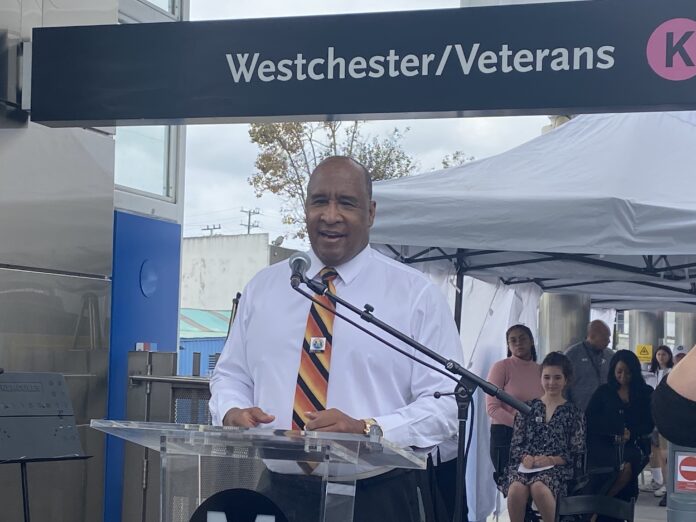 The City of Inglewood officially welcomed and dedicated a new transportation artery on Sept. 17 in a ceremonial coronation of the Westchester/Veterans Station that will load patrons for the K-Line at corner West Florence and Hindry Ave.

“The reason we have a sizzle wheel is because it takes about 10 minutes to articulate the depth and changes to the city, three sports teams, YouTube, LA Phil Harmonic Youth Orchestra, NFL Network, Girl Scouts of Great Los Angeles and on and on and on. The easiest thing to say is what’s happening in Inglewood, including having the Super Bowl, Wrestle Mania, the Olympic Games. The things that happen in the last seven years in the City of Inglewood has only happened in three major metropolitan cities in the country that’s Los Angeles, New York and San Francisco,” stated Inglewood Mayor James T. Butts, Jr.

Butts, Metro CEO Stephanie Wiggins and Metro Board Director Jacquelyn Dupont-Walker were all intimately responsible for the project that cost $1.766 billion.

The K Line was designed and built with the help of community input and local voices to provide a faster, more convenient and reliable way to connect to jobs, schools and the rich cultural places throughout these communities. The K Line will connect to the Metro E Line (Expo), which travels between downtown LA and Santa Monica. By 2024, the K Line will also connect to the new LAX/Metro Transit Center Station, the new Aviation/Century Station and the Metro C Line (Green).

It will also connect folks to The Centinela Adobe, also known as La Casa de la Centinela, is a Spanish Colonial style adobe house built in 1834, that is operated as a play house and museum by the Historical Society of Centinela Valley, and it is one of the 43 surviving adobes within Los Angeles County.

Dupont-Walker has attended every Metro Line ceremony since 2013 and says she hopes to be at the last one as well.

“Each one of them has been unique. Each dedication has had a special message in its own way. We have learned something new at the new K-Line at every stop,” Walker explained. At each one of these stations, I have enjoyed the community stakeholders, the neighbors and everyone who has come out. It has truly, truly been amazing. So, we come to say thank you, that you to the community that has tolerated long past the date we said we would be finish.”

“It’s such a joy to be here. In about a year from now in as late as December 2023 we will open the People Mover which will connect these two things together and you can literally take the train to the plane and the seven most feared words ‘can you pick me up at LAX’ will no longer be the most seven feared words in Los Angeles,” added Los Angeles Mayor Eric Garcetti.

Billions in New COVID Relief: From $600 Stimulus Checks to Black-Run...