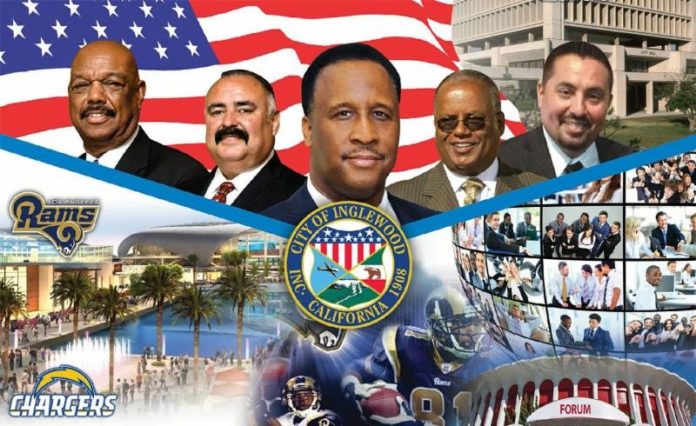 As development transforms Inglewood, the city wants to share the wealth with residents

Not that many years ago, few would have thought that the gentrification of Inglewood would be a cause for concern among the city’s residents and leaders. Yet major and historical development is leading many citizens to ask: How will this personally benefit me?

A major project such as building a stadium would be expected to draw construction workers and trades people from broader Southern California. Hundreds of millions of dollars in contracts for construction supplies and services would ordinarily go to preferred vendors with no ties to the local community.

Our agreements with the developers of the stadium and other projects set a 35% goal for local hires, which means they must live in an area with an Inglewood ZIP Code. More than 1,200 of the 3,000 people who strap on tool belts each day at the stadium site are from Inglewood or neighboring Lennox. In the first two months of 2019, they earned more than $55 million collectively in wages and benefits.

Employers must file payroll data with the city every 60 days to show they are complying with the agreements, which also require that as many supplies and services as practical be secured through firms in Inglewood.

By working closely with the developers of these projects, we are trying to benefit Inglewood residents and small businesses, which are sharing in the windfall of wages and profits from construction projects.

More than half of the nearly 200 apprentices on the stadium construction site are previously incarcerated gang members, many of them from the area. As a former Inglewood deputy police chief, I find that fact particularly uplifting. Most are earning $60 to $90 an hour, including benefits, while learning life-changing trades as ironworkers, electricians and carpenters. These are people who once lived lives of criminality born of desperation and nonexistent opportunity.

At the behest of Inglewood, the stadium construction team has awarded 80 local minority and women-led businesses contracts for supplies and services estimated to be worth more than a half-billion dollars.

The redevelopment also includes completed projects – the renovated Forum and the Hollywood Park Casino – and the recently opened regional headquarters for the Girl Scouts of Greater Los Angeles.

As Inglewood transforms into a major destination for entertainment and culture, we are taking steps to protect those who might be squeezed out by rising rents. About two-thirds of Inglewood residents are renters, so our restrictions will have a broad impact.

After receiving reports of rents potentially doubling, I personally intervened with the owner of two apartment buildings, who ended up delaying the rate hikes by six months, trimming the rent increases by about two-thirds and offering a $10,000 relocation allowance to residents who wanted to move.

In March, the Inglewood City Council approved a temporary citywide moratorium on rent increases, limiting them to no more than 5% of current rent. This is a placeholder until we fashion a permanent housing protection ordinance to protect renters and provide options for them.

Will these moves be enough to ease the sting of gentrification in Inglewood? Time will tell, but we are heading in the right direction.