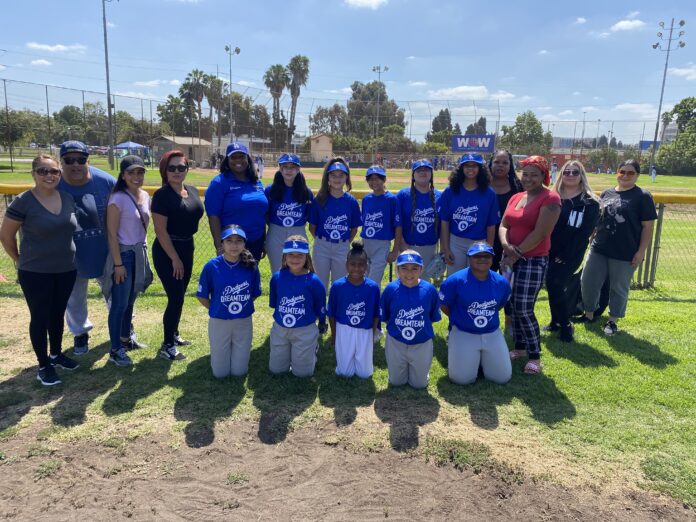 Girls and boys of diamond ready to shine

Juneteenth weekend was flush with an abundance of activity in the City of Inglewood and surrounding communities, but smack dab in the middle of all of its was the start of the Dodgers Dreamteam summer baseball and softball league at Inglewood parks.

Rogers Park was the site of the two-day swing fest that began on June 17 with Senior Softball (ages 13-18) with four teams, all aptly named for former Dodgers players such as Darryl Strawberry, Eric Karros, Jackie Robinson and Dusty Baker.

Then the following day at Rogers a bustling day of activities began with the annual Picture Day ceremonies which consisted of each of the 19 teams taking their individual and team photographs.

Outfitted in their Dodgers blue and grey uniforms emblazoned with white Dodgers Dreamteam and the Los Angeles Dodgers Foundation circle logo on the front, youth ranging from ages 9 to 18 were absolutely ecstatic and googly eyed even as sun barely peaked through the morning dew.

Exuberating gradually colliding with exhilarating and slowly faded into exasperating after the six game tilt covered every bit of nearly nine hours.

As parents say in their unfolding chairs, in some cases a camping tent to shield from the blistering midday sun; the novice baseball beginners scrambled from figuring out whether to run after the ball was hit, to running to third base instead of first when it was in the 9-year old minor leagues; or a pitcher in the major league division (11 & 12 years old) searching for the strike zone and batters on base runners snatching every bag on an over throw or missed ball; while the girls in senior softball division dealt with a 12-year old hurler whipping blazing fastballs by her elders and Morningside High coach Riah Mumphrey taking eight beginning teenagers and quickly mending them into a juggernaut; or her colleague, baseball coach Jeremy Marchese navigate his ensemble of players starving for experience against a hustling band of younger players itching to show their mettle.

From moms and dads, to grandparents, aunts and uncles their little one wearing the Dodgers uniform was more than enough inspiration to shout encouragement amid the called strikes and safe calls.

All of this made possible through the Los Angeles Dodgers Foundation which grants the City of Inglewood with the resources to allow parents to pay just $15 for the season in which they receive three jerseys, a pair of pants, glove if needed and play a seven game schedule that starts the regular season on June 24 at Darby Park with two Senior softball games and continues throughout the following day on Saturday June 25 with a full slate of contest that begins at 9a.m.

Inglewood might still be the Rams, Chargers and soon to be Clippers town, but I couldn’t tell from the sea of blue that engulfed Rogers Park, and not just from the players in the league. I’m talking about moms and pops in sync with their children wearing Dodgers gear from cap to jersey.