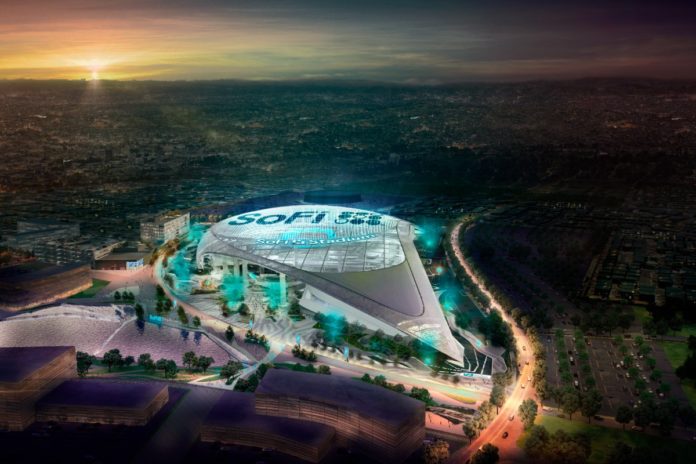 The under-construction future home of the Los Angeles Rams and Chargers in Inglewood is slated to open next summer, but already has a name.

“In less than a year, the Rams will be running out of the tunnel into SoFi Stadium,” said Los Angeles Rams COO Kevin Demoff in a statement from the LA Stadium and Entertainment District at Hollywood Park, which owns the stadium.

Renderings show the new name in enormous, glowing letters that appear on the transparent roof of the building.

The multi-billion sports venue named for the “digital personal finance company” SoFi, which signed on to a 20-year agreement for exclusive naming rights to the venue.

The price tag for the agreement will not be released publicly, but these deals are usually big-ticket items. Last year United Airlines paid $69 million for naming rights to the Los Angeles Memorial Coliseum—the temporary home of the Rams—for a 16-year period.

The SoFi Stadium is part of a 298-acre redevelopment of land that once housed the Hollywood Park racetrack. A whole new neighborhood is also planned for the expansive property, one that will hold shops, restaurants, a hotel, parks, an artificial lake, and 2,500 housing units when it opens in phases starting in the second half of 2020.

As for the stadium, it was originally expected to open in 2019, but a few rainy months pushed the date back. It is slated to open in the summer of 2020. As of April, the stadium was two-thirds complete.

The stadium’s first events will be two Taylor Swift shows in July 2020. Swift will be the first female performer to open an NFL stadium, according to the Los Angeles Times.

Thumbs Up for Chad Cooper’s ‘Black Lives Matter Too’

Wells Fargo Commitment Could Potentially Result in Billions for Small...