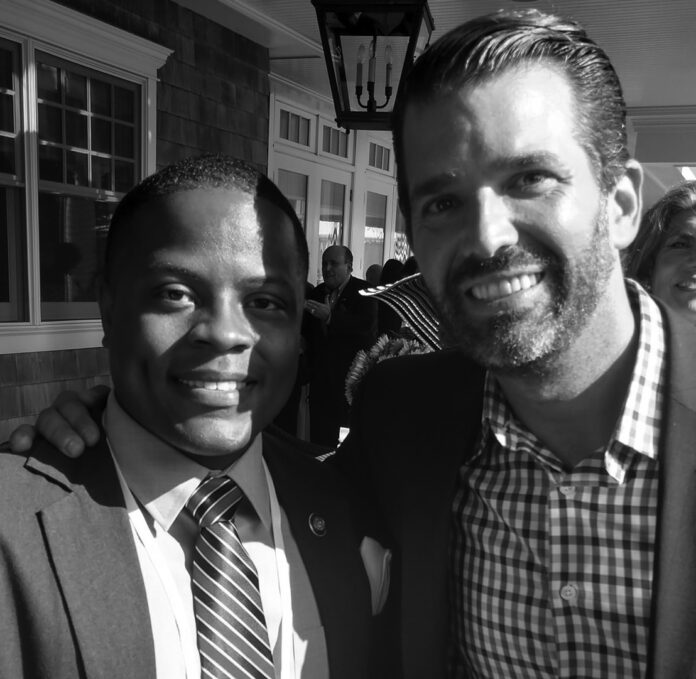 The man aiming to unseat revered public servant Maxine Waters for the 43rd Congressional District on Nov. 3rd demonstrates just how diabolically desperate the Republican Party under Donald Trump rule will go to bring down one of America’s most powerful Black leaders.

Thirty-five year old Joe Collins claims to be from Los Angeles, and while records indicate that he was born at Kaiser Hospital on Nov. 20, 1985, there is no documentation of him having attended or concluded school there.

He allegedly finished school in Ellis County, Texas, a region with a racial makeup of 80.63% White and 8.64% African America.

Collins entered the United States Navy at a young age, but was dishonorably discharged 13 years later after he was found to have violated the long-standing policy that prevents military service members from engaging in any partisan political campaign or elections, candidate, cause or issue. The Department of Defense Directive is 1344.10, Political Activities by Members of the Armed Forces, and the Hatch Act.

During his Naval service, Collins defied that DOD directive and attempted a failed run as a Green Party candidate for president. He also was cited for misuse of the Navy resources, including being barred from use of its website.

Knowing that he was prohibited from making any partisan statements, Collins still castigated then candidate Donald Trump who he now holds in high regard as a member of his fourth political party as a Republican.

His Navy service was marred with court filings where Collins sued the Navy and additional more egregious allegations that he transformed his Naval base apartment into a nightclub (“Blue Velvet”) and hosted an atmosphere of drinking and womanizing.

According to case number 3:17-cv-02451-MMA-BGS filed on Aug 8, 2018;  in 2017 Collins was investigated by the Navy for engaging in partisan politics and failed to obey a lawful general order in violation of Uniform Code of Military Justice Articles 92, 93 and 134.

Collins was directed to cease all partisan political activities, including his presidential campaign and was warned that failure to do so would subject him to adverse administrative action, which subsequently resulted in Collins being dishonorably discharged from the Navy.

He has therefore been prohibited from identifying himself as a veteran of the Navy and appears on the ballot as a retired US Sailor.

The filing indicated that Collins had launched a campaign to run for president in 2020 and had “used his official authority to solicit votes” according the complaint.

While in the Navy, Collins worked as an Aviation Machinist Mate, mechanics that inspect, adjust, test, repair, and overhaul aircraft engines and propellers.

The legal community refers to individuals who choose to represent themselves in court as being a fool for a client.

However, that description did not dissuade Collins from representing himself in court on numerous occasions.

A delinquent father, Collins failed to pay child support while he was then earning $6,861 per month in the Navy until Oct. 2017 and according to documents owed $14,000.

He sued the San Diego department of Child Support Services for $100 million in damages and the termination of his court ordered child support obligations. The suit was swiftly dismissed, and a later appeal resulted in a similar fate and deemed frivolous.

During the proceedings, he wrote, “Joe E. Collins doing business as JOE EDWARD COLLINS III, does not consent to any contract, codes, state codes, statues, commercial presentments or anything similar.”

Additionally he asserted that he transferred a combined $800.2 billion worth of assets to his private trust, the “Royal Family of Collins.”

Collins stated that his trust contained a lengthy “schedule of fees” which includes charges of  $15 million for “DNA or Body Fluids,” with an additional “extraction” charge of $100 million for the “Forced of giving fluid/samples.”

This from a man who had a measly $22 in his checking account in 2018 according to court documents, but has amassed a political war chest in excess of $8 million today.

Previously, Collins has espoused to what is recognized as a sovereign citizen movement, individuals who believe that unless they consent no government can exercise jurisdiction over them.

However, according to the FBI such individuals are on their radar and describe them as “anti-government extremist” who have a propensity for clogging the court system with frivolous lawsuits.

Even with this troubled past; Collins has managed to gain the endorsement of the California GOP, the support of Donald Trump, Jr. and prominent Black Republican South Carolina Senator Tim Scott and even the radical President Donald Trump himself.

President Trump has already established that no one has to be qualified for the office they seek, but the consequences are catastrophic if such an unqualified individual is successful.

Joe Collins probably should be receiving psychological evaluation to ascertain whether he is of sound mind because many of his past and present actions during the campaign against Waters has been sexist, racist, divisive and categorically unethical, indications that he may not be sane.

He is not just unfit for any elected office, but appears to be a danger to others and perhaps himself.

Trump has abandoned reasonable qualifications for public servant so low that character, human decency and credentials don’t seem to matter.

However, by using Joe Collins as the latest GOP patsy and Trump puppet, the Republican Party has shamefully taken a most inept and mentally challenged minority under the guise of our sacred military to unseat one of the most productive and abundantly qualified public servants to ever sit in The United States House of Representatives.

Congresswoman Maxine Waters has been outspent in this campaign by an 8-1 margin by the GOP operatives with hopes that money talks, but as they say in the vernacular of the ghetto BS walks and it is time for Joe Collins to be served his walking papers again on Nov. 3.