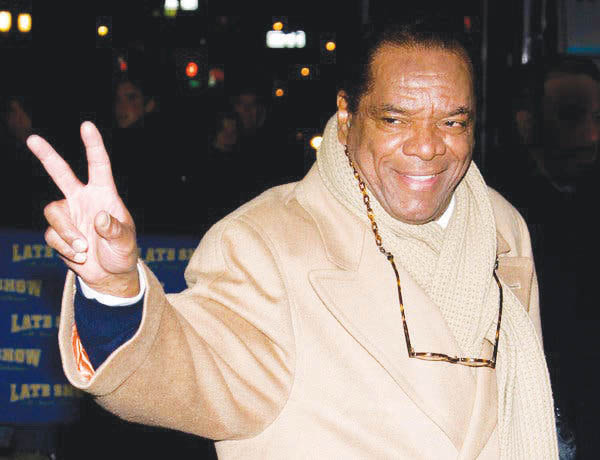 John Witherspoon, an actor and comedian who was best known for his role in the “Friday” movie franchise and also seen on television series including “The Wayans Bros.,” “The Tracy Morgan Show” and the animated “The Boondocks,” died on Tuesday at his home in Sherman Oaks, Calif. He was 77.

“Life won’t be as funny without him,” said Ice Cube, who starred with him in the “Friday” movies.

Mr. Witherspoon started out as a stand-up comic at the Comedy Store in Los Angeles in 1974. Mitzi Shore, the owner, made him an M.C. It was a period when other future stars were also starting out there.

“I M.C.’d the second show,” he recalled last year in a video interview with DJ Vlad. “Dave Letterman M.C.’d the first show.”

Decades later, he would be a guest on Mr. Letterman’s late-night show more than 20 times.

His experience as an M.C. proved useful in 1980, when he played one in the remake of “The Jazz Singer,” starring Neil Diamond. It was Mr. Witherspoon’s first film role.

He had appeared in assorted other movies and numerous television shows when the original “Friday” was released in 1995. In that film, a raunchy comedy that became a surprise hit, he played Willie Jones, the father of Ice Cube’s slacker character, Craig. Willie was, among other things, prone to dispensing fatherly advice while using the bathroom.

“Witherspoon is often on hand to remind an audience that no matter how crass a movie is, it can always, always be crasser,” Wesley Morris, now with The New York Times, wrote in reviewing the third film for The Boston Globe. “Here he’s dithering and frail, which gives his blue comedy a touching Redd Foxx lilt.”

He had been expected to play the character once again in a final installment, “Last Friday,” now in the planning stages.

Mr. Witherspoon was born on Jan. 27, 1942, in Detroit, one of 11 children. As he told the story, local officials were somewhat indifferent to accurate record-keeping — some of the children were listed in birth records with the name Witherspoon, others with Weatherspoon.

“I’m a Witherspoon,” he told DJ Vlad, “but I think I might have been a Weatherspoon in the beginning.”

He was temporarily living with a brother and sister-in-law when he became interested in acting — they were part of an acting group that met weekly, and he was motivated to sign up for some lessons himself. His acting teacher asked him if he would perform in an annual comedy show he was involved in. Although Mr. Witherspoon had done no comedy at that point, he recalled, “I went there and stole the show.”

He tried unsuccessfully to break into comedy in Las Vegas, then went to Los Angeles and began performing at open-mic nights at the Comedy Store. He also worked the door there and eventually moved up to M.C.

Within a few years he was getting small roles on TV as well. One of his earliest credits was on a 1979 episode of the crime drama “Barnaby Jones.” He played a counselor at a camp for teenagers with drug problems; one of the teenagers was played by a young unknown named Sean Penn.

On those films and in his television work, he was known for ad-libbing.

Among his more recent television credits were “The First Family,” “black-ish” and the Adult Swim series “Black Jesus.”

His survivors include his wife, Angela, and two sons, JD and Alexander.

Mr. Witherspoon was still playing comedy dates until a few months ago. “If I hit the lotto, I would be nowhere near the road,” he told The St. Louis Post-Dispatch in 2017. “But I got bills to pay.”

He described himself as a hustler, someone willing to scramble to make a buck. He had a YouTube channel where he posted videos called “Cookin’ for Poor People,” in which he would prepare dishes like Poor Man’s Gumbo and Meatloaf Surprise. He introduced the bits with the catchphrase “Because when you’re hungry, everything tastes good.”

He once tried a line of humorous greeting cards.

“I saw a lady on ‘Oprah’ once who had greeting cards with a dog on it,” he told The Bay State Banner in 2011. “I figured, I look better than that dog. I can do that.

“But apparently I don’t. I ain’t making no money off them damn cards. They’re too bizarre.”