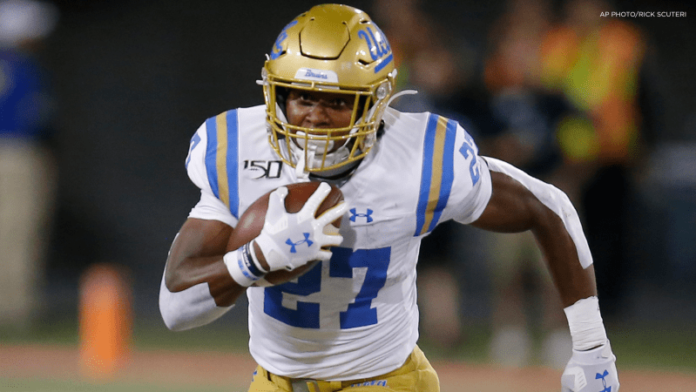 The stage is set for running back Joshua Kelley to add a few more chapters to his unique L.A. story.

The UCLA product was drafted in the fourth round (No. 112 overall) of Saturday’s 2020 NFL Draft by the hometown Los Angeles Chargers. He’ll play professionally at SoFi Stadium in Inglewood, Calif., the same city where he was born over 22 years ago.

Kelley’s landing spot is also perhaps the most ideal fit. The rookie enters a selfless running backs room that includes 2017 undrafted free agent Austin Ekeler and 2018 seventh-round selection Justin Jackson, two players who have outplayed where they were – and weren’t – drafted.

“Anthony Lynn, he’s dope, man,” Kelley said. “He’s great. He’s been around UCLA, so it’s awesome. And … those two great running backs they have in there, they’re great people from what I hear. So, I think it’s just awesome I get to be a part of that.”

Lynn said the team needed to identify a bigger-bodied back who could take the role of Melvin Gordon – a downhill runner who’s also reliable in goal-line and short-yardage situations.

While Lynn acknowledges that you don’t immediately replace a Pro Bowler like Gordon, Kelley’s potential is evident.

“We feel like he can get to that point, I can tell you that,” Lynn said.

Kelley transferred to UCLA from UC-Davis in 2017. In 2018, he rushed for 1,243 yards, including a 40-carry, 289-yard performance against crosstown rival USC. He followed that up with another 1,000-plus-yard campaign in 2019, earning team MVP honors in both seasons.

General manager Tom Telesco said both Kelley and the Chargers’ first-round quarterback Justin Herbert stood out at the 2020 Senior Bowl in Mobile, Ala. in January.

“You watch them in the fall, then you see them in an all-star game against the best seniors in the country,” Telesco said. “It was nice to see him really step up, too. That’s part of our evaluation process. He’s a very well-rounded running back and we’re looking forward to seeing him get in the mix.”

Kelley’s 458 career rushes for the Bruins far outweigh his 38 catches, but as he said he told scouts, “just because you haven’t been asked to do it doesn’t mean you can’t do it.”

“For me, I take pride in running between the tackles,” Kelley said. “I can do outside zone, inside zone, power – I’m really good at that.

“And also, I’m versatile. I went to the Senior Bowl, the combine and showcased my ability to catch out (of) the backfield. I showcased myself to beat linebackers one-on-one. I take pride in being as versatile as I can.”

Kelley knows, though, that the preparation required for success at the NFL level starts now.

“I just can’t wait to make them feel like they made the right choice,” he said. “I have to get to work.”