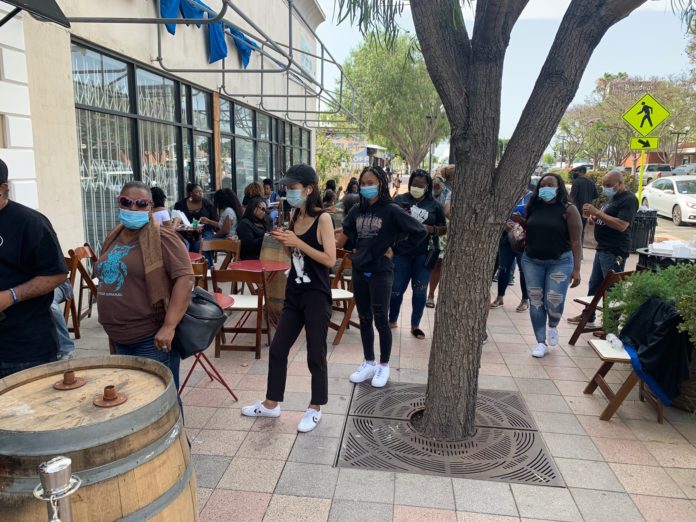 Not long after the local residents, their guests and visitors enjoyed a world-class Juneteenth Parade and Celebration, the Inglewood Sports Bar and Lounge extend the festivities by providing a free barbecue meal to everyone,  that extended into the early evening.

The delectable meal featured barbecue chicken and ribs, potato salad, and baked beans topped off with a non-alcoholic beverage of choice. Kudos to the Inglewood Sports Bar and Lounge for ‘giving back’ to the City of Inglewood!

The CLBC lights up the State Capitol in recognition of Juneteenth

“Juneteenth is Freedom Day and a cause for celebration,” said Assemblymember Shirley N. Weber, Ph.D., Chair of the California Legislative Black Caucus. “What is encouraging is the renewed interest in Juneteenth by young people. I think it is this moment where they recognize their power to make change. The message of Juneteenth is especially salient in the context of the current protests over ongoing and persistent brutality and inequity in the lives of Black Americans. American ideals promise equality, but have yet to fulfill that promise. By lighting the State Capitol in red, black and green, the California Legislative Black Caucus demonstrates its commitment to making that promise a reality in California.”

Congresswoman Maxine Waters (CA-43) delivered an uplifting message to the African American community in recognition of Juneteenth, the holiday that recognizes the true end of slavery in the United States. On June 19, 1865 – more than two years after the Emancipation Proclamation ended slavery — Union soldiers, led by Major General Gordon Granger, arrived in Galveston, Texas to make the last slaves aware of their freedom. 155 years later, the fight for freedom, justice, and equality continue.

“B.B. King sang the blues…and Kendrick Lamar rapped ‘alright,’” said Congresswoman Maxine Waters. “Now I truly believe we will ‘be alright’ because of the people who are now in the streets all over the world protesting the killing and the abuse of Black men and women. I’m with Kendrick Lamar. Everything is going to ‘be alright.’”

Congresswoman Waters also paid tribute to her dear friend, the late- Representative Al Lawson of Texas who is known as the “Father of Juneteenth” as a result of his successful effort to make Texas the first state to create a paid, statewide Juneteenth Holiday in 1980.