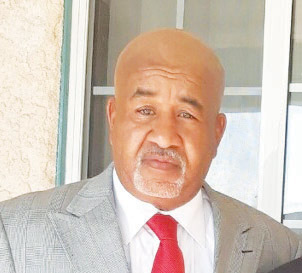 ‘Never Give Up’- “ Gangs are like war. In order to defeat them, you must cut their supply lines of fresh troops so there will be no one left to fight. In order to do that, you need to give those kids a positive alternative.” –Lou Dantzler, founder of Challengers Boys & Girls Club-

The hands of Kelvin Smith resemble a man who has worked long, hard and grueling hours in the construction field, but his heart and soul reflects that of the late Lou Dantzler, founder of Challengers Boys & Girls Club who passionately spent his life helping individuals escape an existence of poverty, crime and futility.

Part of Smith’s journey is chronicled in Dantzler’s book ‘A Place to Go, A Place to Grow’ and defines how Smith escaped a life of street gangs, drug pusher, violence and crime to become a successful businessman, father and mentor.

He went from being one of the kids that found solace at Challengers, to a man responsible for building the ‘Smile’ dentistry and the tennis courts at the South Los Angeles center.

That was especially significant to Smith because as he explained it; “It was huge because the kids saw as an example of what could happen for them. If Kelvin can do it then anybody can do it.”

Kelvin Smith’s remarkable transformation was inspired by the very words and deeds of Dantzler who encouraged him to never give up on himself and those less unfortunate.

Like many who grow up in impoverished communities, the best choices are not always the ones made, but instead the ones not made.

Smith had aspirations of being a football player, but a bum shoulder ended those dreams at Pasadena City College. He enjoyed modest success as a defensive back at Manual Arts high School on the lower level and then varsity team.

Reality hit hard when his son, Kelvin Jr. was born in 1991 and that is when Smith as states it; “I had to go to work.”

Coming from a family of electricians, Smith ironically began his career as a truck driver. First being taught how to operate one by his childhood friend and then subsequently purchasing his own big rig.

Smith eventually obtained his construction license and maintained the business under the same name and has not looked back since.

He operates his company out of his home and many of his employees are gang members, former drug offenders, or felons similar to the people Dantzler detailed in his book.

He feels equally obligated demonstrating to young people how important it is to care for the seniors in their community, by mentoring kids to take out the trash for the elderly and performing other chores that enhance the quality of life for all.

Smith is the father to four children, Kelvin Jr., who resides in Canada, LaToya, Khaila and Calvin.

When asked the best example he has provided to his children, Smith’s response on the profound.

“I think the best example I provided to my kids was my work ethic, loyalty and determination. I am a firm believer that hard works pays off and there is no substitute to doing your best.”

That philosophy earned him rave reviews on projects such as construction on the main entrance at Universal Studios.

Smith has also been very instrumental in the promotion of those who worked for him. Some have went on to work on major projects such as the Crenshaw/LAX Line and SoFi Stadium in Inglewood.