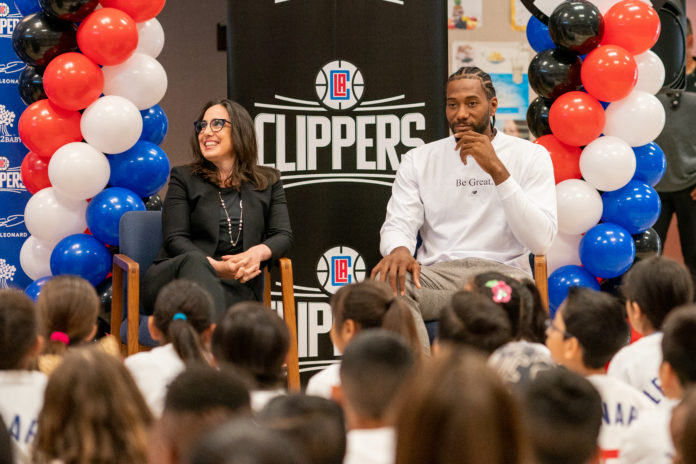 Every student in those school districts will receive a free backpack, just in time for the start of the school year. The gift is the largest in LAUSD history and will allow hundreds of thousands of families to take the money they would spend on a backpack and use it instead on essential items like food, rent, utilities and more, which can make a major difference in a family’s livelihood.

The news was first delivered during an event at Leonard’s alma mater, Cloverdale Elementary School in Moreno Valley and later in the morning in Los Angeles at the 107th Street Elementary School.

“My goal this year is to make a meaningful contribution both on and off the court,” Leonard said in a statement. “This felt like the right way to get started. It was important to me to make this announcement in my hometown of Moreno Valley at my former Elementary School, but the benefits this program will have across all of Los Angeles makes today even more special.”

Leonard is a Southern California native. He played basketball at Martin Luther King High School in Riverside and spent two seasons playing for San Diego State University. Leonard signed a three-year contract with the Clippers this offseason after leading the Toronto Raptors to an NBA title.

Led by Chairman Steve Ballmer and with Head Coach Doc Rivers, the winningest head coach in franchise history, the Clippers will be competing after eight consecutive winning seasons and seven Playoffs appearances in the past eight years. The team has demonstrated their commitment to the City of Inglewood and Los Angeles through the L.A. Clippers Foundation, providing resources and opportunities that make positive contributions toward leveling the playing field for youth in Southern California.

Baby2Baby provides children living in poverty, ages 0-12 years, with diapers, clothing and all the basic necessities that every child deserves. In the last 8 years, Baby2Baby has distributed over 70 million items to children in homeless shelters, domestic violence programs, foster care, hospitals and underserved schools as well as children who have lost everything in the wake of disaster. Every year, Baby2Baby serves hundreds of thousands of children nationwide.