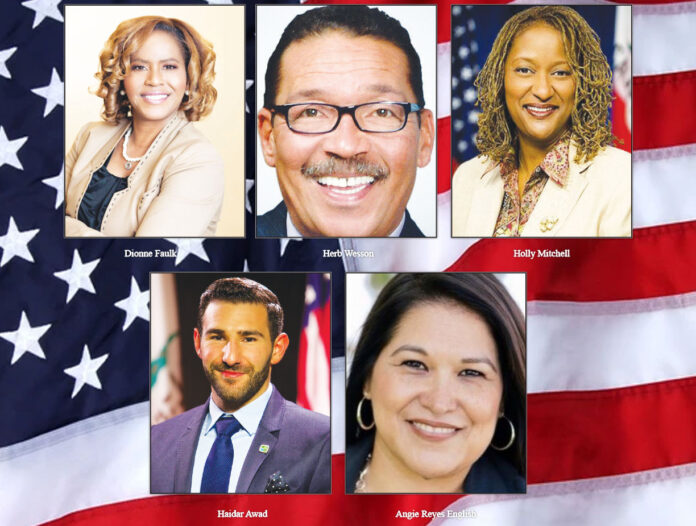 With both the Democratic and Republican National Conventions coming to a close during a most contentious political season, powerful Inglewood Mayor James T. Butts has made his choices for significant local elections that includes Inglewood, Hawthorne and Los Angeles County.

In Inglewood Aisha Thompson, who has served as Deputy Clerk under retired Clerk Yvonne Horton, will run unopposed to replace Horton for that position in the general election on Nov.3.

Longtime Inglewood City Council member Ralph L. Franklin will not run for District 4 and will be replaced by Inglewood Unified School District (IUSD) board member Dionne Faulk who will be running unopposed.

Franklin, a labor leader, was elected in 2003 when he was overwhelmingly elected over former Councilwoman Lorraine M. Johnson.

Faulk will vacate her Seat 1 on the IUSD board and the Los Angeles Count Administrator Erika Torres will select her replacement to serve out her term.

On the IUSD board she represented Warren Lane, Woodworth/Monroe and Kelso.

Faulk won a first term in the at-large general election on April 4, 2017.  Her experience includes serving as the supervisor of enforcement investigations and administrative operations and as a supervising special investigator for the California Department of Consumer Affairs, Bureau of Real Estate.

A graduate of California State University Dominguez Hills, Faulk earned a bachelor’s degree in economics and a juris doctor from the University of West Los Angeles School of Law.

Mayor Butts praised Faulk, whom he considers a longtime friend.

“Dionne Faulk is a longtime Inglewood resident and mother of two boys. The residents of District 4 will be well represented by a proven and collaborative official. I look forward with the second elected City Councilwoman in the history of Inglewood,” Butts told Inglewood Today.

Additionally, Butts weighed in on candidates in neighboring city Hawthorne in the City Council and Mayor race, respectively.

A University of California, Riverside graduate, Haidar is currently  vice president of Finance Auto Sales in Hawthorne, one of the fastest growing auto dealerships in the South Bay region.