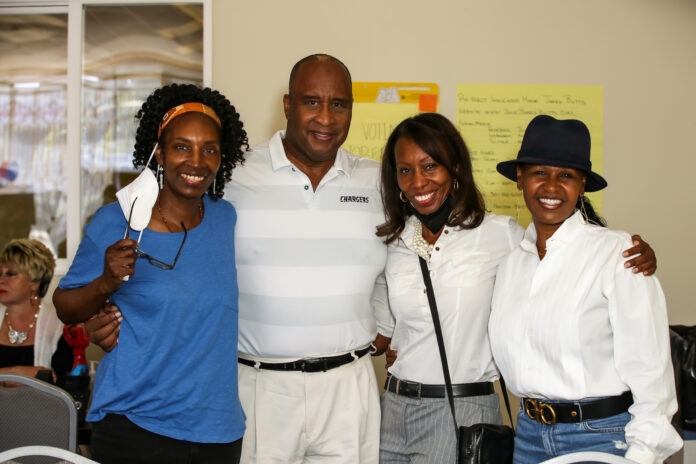 On Sunday, October 2, 2022, incumbent Inglewood Mayor James T. Butts, Jr. formally launched his re-election campaign for his fourth term as the Mayor of the City of Inglewood, California.  Approximately 150 supporters responded to the mayor’s invitation and joined him at his campaign headquarters at 529 E. Manchester Blvd.

Mayor Butts said, “I am honored so many Inglewood residents came out on a Sunday to help me kickoff my re-election campaign. It’s been an honor to serve and together, we’re going to keep pursuing our self-determination for Inglewood.”

The mayor’s long list of achievements is already legendary and his cumulative accomplishments have re-positioned the City of Inglewood as the gem of the South Bay. He and his council colleagues have ushered in Sofi Stadium, the 70,000-seat, world-class sports and entertainment indoor arena that is home for the National Football Leagues’ Los Angeles Rams and Los Angeles Chargers;  Intuit Dome, the National Basketball Association’s Los Angeles Clippers’  indoor arena that will seat 15,000 and open in 2024; the Los Angeles Youth Philharmonic Orchestra, which will continue to introduce and teach 200 Inglewood  youth classical instruments; the Girl Scouts of America Regional Headquarters; and thousands of residential housing units and mixed-use developments, to name only a few.

Mayor Butts added, “Inglewood is still an embryo.  We are in the beginning stages for the changes that are yet to come.  There’s still so much work to be done.  In 2023, the NCAA Championship Bowl game will take place in Inglewood, and WrestleMania will be held here as well. By 2024, the Clippers will open a state-of-the-art NBA arena – The Intuit Dome – in Inglewood. Finally, in 2028, the Olympic Games will open in Inglewood, and Olympic Basketball and Swimming competitions will occur in the resurrected City of Champions.  Add to that, we’re building more affordable housing and expanding transportation opportunities.  I’m still just getting started.”

Mayor Butts was first elected mayor of Inglewood in 2010 and re-elected in 2014 with an 84% vote and in the early years of his tenure he guided the city’s spending, avoided the city’s near- insolvency and returned the city’s financial posture to a positive position. He also led efforts to renovate and reopen The Forum.

Californians Can Get $300 Extra a Week in Unemployment Benefits —...