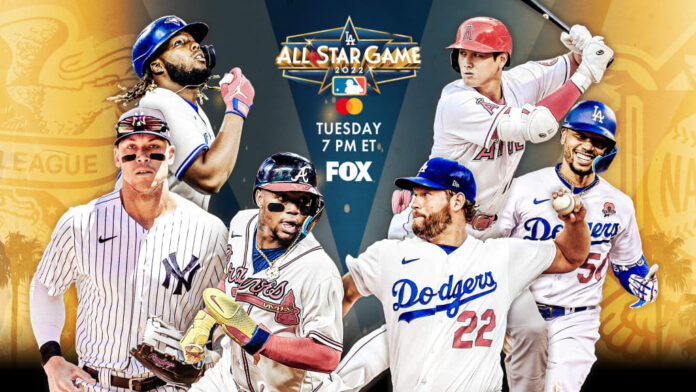 The 2022 All-Star Legacy initiative seeks to address equity gaps in sports-based youth development, education, homelessness and military veterans’ issues. Following this year’s Midsummer Classic, and in combination with the 2020 All-Star Legacy commitment, MLB, the Los Angeles Dodgers and LADF will have contributed more than $6 million to benefit nonprofit organizations and make an impact on the lives of individuals throughout Greater Los Angeles. This year’s All-Star Legacy effort will support students from the Boys & Girls Clubs of Metro LA, youth and coaches via youth development mentorship and training organizations, food and basic essential day-to-day needs of families through the Los Angeles Regional Food Bank and Baby2Baby, and homeless veterans through Volunteers of America Los Angeles. Since 1997, MLB and host All-Star Clubs have donated approximately $100 million through the All-Star Legacy initiative.

In addition to All-Star Legacy ceremonies, Major League Baseball has invited a special group of young fans from Make-A-Wish, Miracle League and Boys & Girls Clubs of America to receive an All-Star experience:

Miracle League Game – This annual occasion will give an opportunity to children with special needs from the Miracle League to be part of a fun, engaging game at PLAY BALL Park.

Make-A-Wish – Four young fans whose wish was to be part of All-Star Week festivities, including all events at Dodger Stadium, will be special guests of Major League Baseball. They include Brody (6) from Northbrook, IL; Jacob (16) from Leominster, MA; Bryan (17) from Pomona, NY; Ethan (17) from Fredericksburg, TX. Each year, the Make-A-Wish Foundation grants life-changing wishes for children with critical illnesses. These wishes give kids the emotional and physical strength needed to fight their medical condition. Since 1980, Major League Baseball and its Clubs have worked with Make-A-Wish to grant wishes for children, donate tickets, and raise money for local chapters.

MLB is partnering with KultureCity during All-Star Week to make events at all three All-Star Hub Locations Sensory Inclusive™, including a new sensory room at Dodger Stadium for all ballpark events Saturday, Monday and Tuesday, as well as Capital One PLAY BALL Park and Capital One All-Star Oceanfront at the Santa Monica Pier. Sensory Bags will be available throughout the week at All-Star events. These bags include noise-canceling headphones, fidget tools, a feelings thermometer, and other calming mechanisms. At MLB Live at DTLA, including Capital One PLAY BALL Park, there will be a KultureCity SAV vehicle outside and a sensory room inside the Convention Center. KultureCity is the nation’s leading nonprofit dedicated to fighting for inclusion and acceptance of all individuals. KultureCity advocates for those with sensory challenges such as autism and PTSD, just to name a few. KultureCity provides training and equipment to public and private spaces to create an inclusive experience for everyone to fight against social isolation.

Heal the Bay All-Star Beach Cleanup – MLB is partnering on a beach cleanup in Santa Monica with “Heal the Bay,” a local nonprofit dedicated to making the coastal waters and watersheds in Greater Los Angeles safe, healthy, and clean. This MLB Green Team Event is part of the league’s continued efforts to promote sustainability and environmental awareness while also giving opportunities to take direct action through volunteerism. Other groups like MLB Sponsor Corona and “Players for the Planet,” also will be contributing volunteers for this effort. Players for the Planet, founded by former MLB outfielder Chris Dickerson, works to connect professional athletes, sports teams, and organizations with actionable opportunities to serve and protect the environment.

MLB Environmental Efforts: MLB will continue its sustainability focus during All-Star Week across all three 2022 All-Star Hubs: Dodger Stadium, MLB Live in DTLA & All-Star Oceanfront. MLB plans to certify the event as socially and environmentally friendly through the Council for Responsible Sport. Efforts include:

Green Teams consisting of local college students will collect recyclables between innings during the ballpark events on July 18th and July 19th, attend a career night on July 14th featuring a panel of ballpark operators, and volunteer at the Heal the Bay All-Star Beach Cleanup on July 16th.

Consistent with past All-Star Walking Paths, DTLA will feature educational “Green Stars” with environmental facts regarding MLB and its Club efforts throughout the year.

Dodger Stadium is changing out all single-use cups with their Michelada’s souvenir cup for fans during All-Star Week and MLB is providing reusable water bottles and water refill stations to broadcasters, media & staff in an effort to reduce single-use plastics.

The league will work with partners to offset its environmental footprint during All-Star Week.

v 5,000 California Trees Planted – MLB is making a post-All-Star contribution to “One Tree Planted” that will lead to 5,000 trees planted as part of appropriate reforestations projects in Susanville, CA, with the objective of securing the best possible outcomes in terms of the impact, the number of trees planted, and the survival rate of the trees. One Tree Planted plants trees in areas that have been devastated by fire, drought, and floods among other causes. Benefits to tree planting programs include: increasing wildlife biodiversity; improving air and water quality; improving soil health; providing jobs in local communities; and restoring community well-being. One Tree Planted and its planting partners work together to ensure that seedlings are planted and maintained with care in appropriate locations and under conditions in which they will thrive.

Major League Baseball will continue to focus on the next generation of baseball & softball athletes through a variety of activities during All-Star Week.

Commissioner’s Cup & Jennie Finch Classic @ MLB Youth Academy in Compton – The All-Star Commissioner’s Cup and Jennie Finch Classic presented by ARM & HAMMMER are returning to the Midsummer Classic, with competition centered at the MLB Youth Academy in Compton, CA – Baseball’s first Youth Academy (established in 2006) – from July 15th-18th. These youth baseball and softball tournaments feature teams from MLB Youth Academies around the country and Puerto Rico. Opening ceremonies for the tournaments will be held on Thursday, July 14th, preceded by local Pitch, Hit & Run and Jr. Home Run Derby competitions that will be open to the public all afternoon.

MLB-USA Baseball High School All-American Game – Players representing 16 States from around the Nation will compete in the third edition of the “High School All-American Game,” scheduled at Dodger Stadium for Friday, July 15th. This premier All-Star showcase game will feature a roster of nearly 40 participants who are some of the top U.S.-based high school baseball prospects for next year’s MLB Draft (2023). The livestream of the High School All-American Game on MLB.com, starting at approximately 6:00 p.m. ET, will be produced by MLB Network with Scott Braun, Harold Reynolds and Jonathan Mayo on the call, and AJ Andrews serving as a sideline reporter. The game will re-air on MLB Network at Noon ET on Saturday, July 16th.

Clinics at PLAY BALL Park – There will be a series of special clinics held at PLAY BALL Park for a variety of groups, including on Sunday when kids connected to Tragedy Assistance Program for Survivors (TAPS) will be part of the DTLA experience.

Diverse Business Partners – MLB is the lead sponsor of the two most popular events by the Southern California Minority Supplier Development Council (SCMSDC) – the “Business Beyond Barriers (B3) Conference + Expo” and “Supplier of the Year Awards Luncheon.” On Friday, July 15th at Dodger Stadium, MLB and the Dodgers also will co-host an event, titled “Doing Business with Baseball,” which will be a luncheon and network reception that will invite entrepreneurs and diverse business owners representing a wide diversity of industries selected by the SCMSDC network.

Historic Displays – MLB and the Dodgers partnered with the Negro Leagues Baseball Museum (NLBM) to curate a series of displays highlighting the first Black players to break the color barrier for each MLB Club – starting with Jackie Robinson in 1947 and ending with Elijah Jerry “Pumpsie” Green in 1959. This collection opened on Jackie Robinson Day (April 15, 2022) and will be on display throughout All-Star week. Additionally, at PLAY BALL Park, a live art mural will be created by LA artistic legend “Mister Cartoon” and his son “Mr. Lefte” to capture Los Angeles’ unique Mexam culture. The exhibit will be complemented by local Mexam food, music and cultural influences.

Important Conversations – MLB will host three distinct conversations at PLAY BALL Park touching on the cultural impact of baseball, including (a) Hispanic & Latino players and broadcasters; (b) MLB stars who grew up in Los Angeles; and (c) the Life & Legacy of Jackie Robinson.