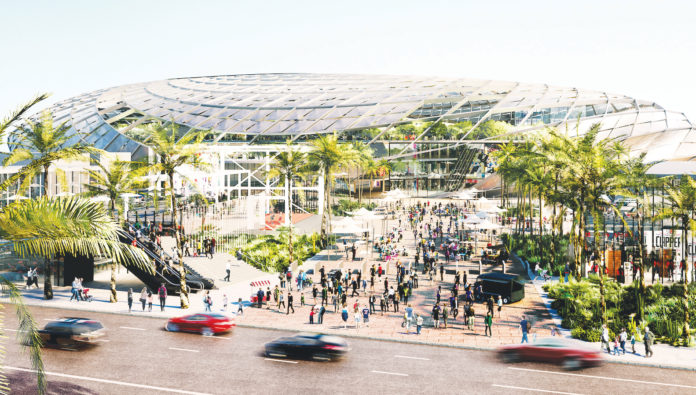 The new year comes with new momentum for the LA Clippers arena project.  The City of Inglewood released the draft Environmental Impact Report for the proposed arena campus on December 27th,  marking a major step forward for the state-of-the-art complex.

The draft EIR shows how the project will achieve the most stringent environmental standards and become the most environmentally friendly and energy efficient sports arena in state history.

The draft EIR follows the recent certification by Governor Newsom and the California Air Resources Board, which determined the Clippers arena project will meet landmark environmental standards. They certified that the project will be net-zero for greenhouse gas emissions.

“The release of the EIR and the start of the public process marks an exciting and major step forward for the Inglewood Basketball and Entertainment Center,” said Chris Meany, lead developer on the project. “This open and transparent process will give the residents of Inglewood the opportunity to learn more about the project’s stringent environmental standards and incredible community benefits.”

The thoroughly researched and remarkably detailed report took 23 months to prepare and cost more than $5 million to produce.  It offers a wide range of innovative solutions to complex challenges, including traffic.

“This report will be an incredibly useful tool as we work with the Clippers to craft and implement solutions to safeguard Inglewood’s quality of life,” said Inglewood Mayor James Butts.

The 18,000-seat arena, at the intersection of West Century Boulevard and South Prairie Avenue, will also be home to the LA Clippers’ team offices, practice facility, sports medicine clinic, and an outdoor plaza with community and retail and restaurant uses.

Among other things, the environmental report studied 114 intersections, 28 neighborhood street segments, 53 mainline freeway segments and 10 freeway ramps in a 20-square-mile area around Inglewood.  The result is a plan that will actually help improve Inglewood traffic on non-event days and help reduce traffic congestion on game days by 15%.

The report’s release kicks off the required 45-day period for the public to comment on the project.

If approved by the City of Inglewood, the arena would open in time for the 2024-2025 NBA season.

Other sustainability measures include:

·      A “Zero Waste” program to reduce and divert waste from landfills.

·      An on-site solar energy generation system that will produce more than 1 million kilowatt hours of electricity per year and extensive use of “green” (i.e., renewable) energy sources.

·       A program to purchase and install 1,000 electric vehicle chargers for residences in Inglewood and the surrounding area.

In addition to the complex, the LA Clippers are intent on being a good neighbor off the court. The team has already pledged to provide a $100 million community benefits package designed to help lift families out of poverty and give more Inglewood students an opportunity to achieve the American dream.

The majority of the money is dedicated to easing the area’s housing crunch with $75 million for affordable housing programs and $5 million to help first-time home buyers and renters. The program also includes nearly $20 million for youth and family programs that will help provide quality after-school activities, student scholarships, library upgrades and services for senior citizens.

The project will be an economic boon to Inglewood and the surrounding communities. The arena complex will generate an estimated 7,000 union construction jobs, 30% of which are earmarked for Inglewood-area residents, and pay a total of $450 million in wages during the construction process.

When completed, the complex will provide an estimated 1,500 permanent jobs, 35% of which are earmarked for Inglewood-areas residents, and generate more than $100 million in new tax revenue, which help fund critical services, through 2045.