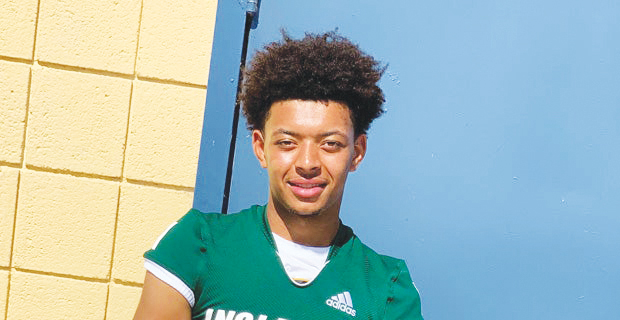 Heywood keeps lighting it up

The Inglewood Sentinels (8-0) will face arguably its stiffest challenge of the season when it travels to North Torrance (7-1) on Friday Oct. 25 for first place in the Pioneer League.

Led by quarterback Jared Heywood, the Sentinels will make the playoffs for the first time in nearly a decade.  Heywood has been sensational all season and head coach Mil’Von James considers his signal caller to be a future D-1 player.

“His preparation through the week leading up to games is so  challenging that it makes the games on Friday easy for him,” James told Inglewood Today.

Heywood (6’1, 190) has completed 79 percent of his passes for 2,776 yards and 41 touchdowns. His quarterback rating is 147, that’s a close to perfect you will see from the quarterback position.

James says he’s being recruited by Fresno State among others and declared: “He is a division one college quarterback for sure.”

As for the contest with North this week, James views it as just another football game.

“Our approach is the same. We don’t look at records. We break down the film and focus on our approach to the game.”

Another standout for the Sentinels is junior receiver Orion Peters, who has accumulated 952 yards and 12 touchdowns.

North on the other hand will counter with a standout quarterback of its own in freshman sensation Trevor Lagarde who has completed 85 of 148 passes for 1,243 yards with 20 touchdowns and five interceptions.

Meanwhile, Morningside (1-7) will play host to Torrance (0-8) for its homecoming game at Caroline Coleman Stadium on Friday Oct. 25 at 7p.m.