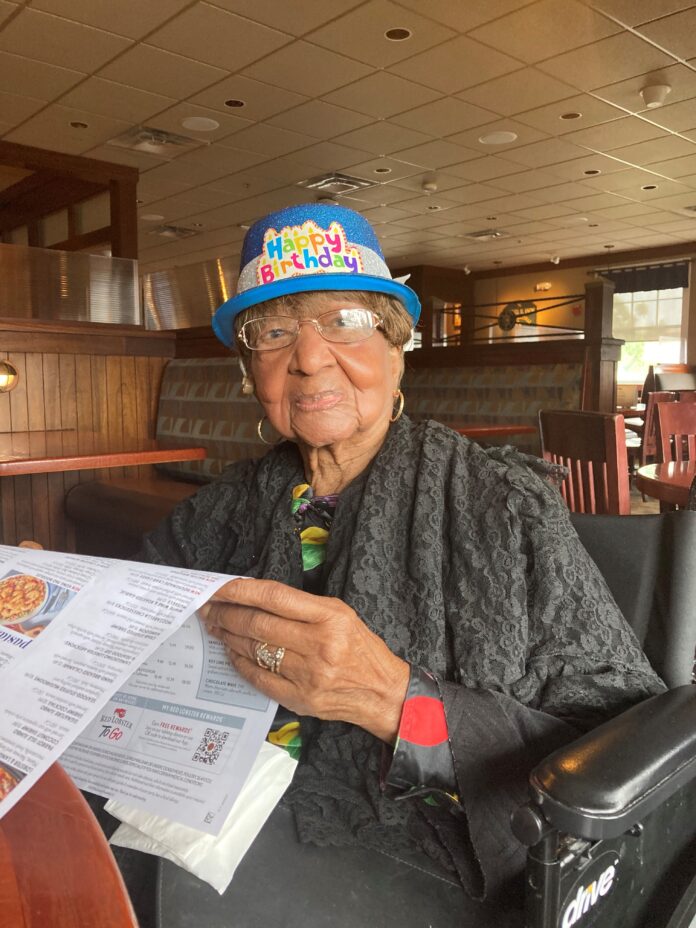 One paints the beginning

of a certain end.

The other, the end of a

sure beginning.” Passing Time, a poem by Maya Angelou

Wednesdays are bath day for the bubbly Osage Senior Villas resident Rosezell Roney and she can’t wait for the warm water soothing splash that her caretaker Alice Lovett provides for her.

It is a comfort the 104 year old Roney has earned, out living her husband, children, a grandchild and surviving 19 presidents from Woodrow Wilson to Joe Biden.

She says her favorite of all them was Barack Obama who was the 44th President of the United States and the first Black Commander in Chief.

“I didn’t think I would ever see it happen (a Black President) but I am so thrilled that I did, and (First Lady) Michelle (Obama) is the best, I just love her,” Roney shared with Inglewood Today.

Roney came to Inglewood 17 years ago from her birthplace of Philadelphia, and on May 28 celebrated her 104th birthday with a half dozen senior friends at Osage and the following day she was treated to the Red Lobster by her daughter in law Ruth Roney.

While growing up and residing in Philly, Rosezell worked as a beautician and owned Rosezell’s Beauty Salon.

She was married to Wallace Roney whom she wed in 1938, but came west when he died in 1985 to live with one of her two sons, Wallace Roney Jr.

Roney Jr., who has since past was the father of acclaimed jazz musician Wallace Roney III, who took lessons from Clark Terry and Dizzy Gillespie and studied with Miles Davis from 1985 until Davis died in 1991. Wallace III, who succumbed at the age of 59 to COVID, was the only trumpet player Davis personally mentored.

Another son, Raymond Roney died at the age of 75.

In the meanwhile, Rosezell is still sound of mind. She also subscribes to the Philadelphia Tribune newspaper and reads it regularly.

To put her longevity into perspective, Rosezell was 10 years old when televisions hit the market in 1927. Color sets didn’t come around until 1954 and of course computers would change everything in 1984.

One hundred and four years ago, gasoline was seven cents a gallon for a silver dime, unemployment was at a miniscule 4.6. Slavery had long been abolished but segregation ran rampant throughout the nation.

She had three grandchildren, but two remain in Krystal and Antione.

Rosezell says that her secret success to living is rest.

“I believed in being a great worker and coming home taking a hot bath. Now that I am no longer working I believe in rest,” she added.

She also believes in the lord and remains a member of Bright Hope Baptist Church in Philadelphia, but Rosezell has visited West Angeles with her late son on occasions.

Although she enjoyed ice cream, cake and fried chicken at her birthday celebration at Osage she absolutely adores potato salad and when she can get her hands on one, a hot dog at Costco.

And oh, keep your eye on her when some Hershey kisses are in the candy bowl.

“I have to watch her because she’ll keep eating them,” said Lovett.

It does get any sweeter than that.