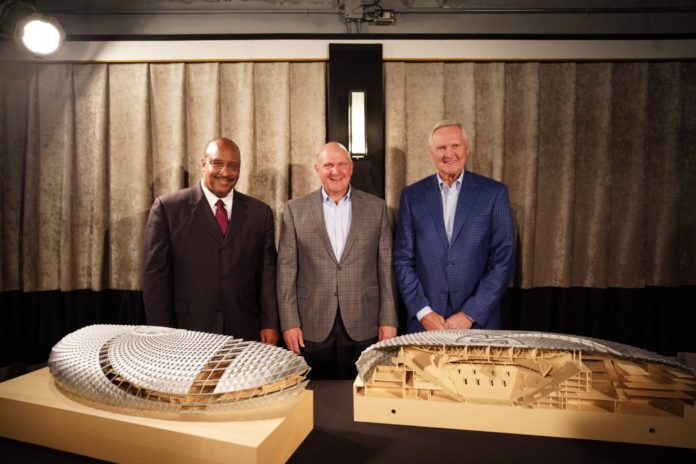 Perhaps it was fitting that Ballmer did this while in the “Blue Chips” conference room inside the Clippers’ downtown Los Angeles office. After all, Ballmer’s arena could be quite the recruiting chip for future free agents.

The Clippers’ proposed new home would come complete with corporate headquarters, a team training facility designed down to the detail of how many paces it takes a player to walk from the parking lot to the locker room to the home bench, a sports medicine clinic, community courts, and an area with a giant big screen for fans to watch games outside, a la Toronto’s Jurassic Park — all located on 26 acres in Inglewood, California.

It will have to overcome the hurdle of a lawsuit filed by Madison Square Garden, which owns The Forum in Inglewood, but Ballmer is confident that the project — which will be privately financed — will get built.

The new basketball palace will have some diamond-shaped metal — including solar panels — on top of a building designed to look like a basketball with the Clippers’ logo going through a net. Ballmer visited 13 to 15 NBA arenas and facilities, including those of Milwaukee, Detroit, Indiana, Charlotte, Utah, Portland, Dallas and San Antonio, as well as the University of Oregon, in hopes of finding inspiration for what he wants his arena to look and feel like.

“Being in L.A., the free-agency thing will always be a little more important to us,” Ballmer later added. “That means we got to invest in the players’ experience.”

For fans and players, Ballmer wants it to sound and feel like a college basketball arena, complete with a deafening home-court advantage. On one end of the court, behind the basket, Ballmer wants stands that go from the bottom to the top, without any suites or tiers, to simulate something like a student section in a college fieldhouse.

He calls it “the wall of sound.”

“I want it to be a noisy building,” said Ballmer, who is concerned about every comfort and detail down to how many toilets the arena will have. “I really want that kind of energy; think Oracle [Arena] has been that way, Utah, Portland has got good energy. I think our Clipper fan base is a little more tenacious. They’re people [who have] decided they’re sticking with us, and now I think we will get new kinds of fans with Paul and Kawhi joining us, but I think it is a hard-core fan base. I think that we can get real noise, real energy in the building.”

During the Clippers’ free-agency meeting with Leonard, Ballmer showed a couple of renderings of the arena design to the reigning NBA Finals MVP. Leonard asked whether the new arena will really happen.

“This is really going to happen,” Ballmer said he told Leonard. “Obviously we have to go through the process … the lawsuits that Madison Square Garden has brought, but we are feeling confident that we can build our stadium in Inglewood.”

The Clippers’ proposed arena would include corporate headquarters, a team training facility, a sports medicine clinic, community courts and an area with a giant big screen for fans to watch games outside. LA Clippers

Madison Square Garden, which has owned the Forum since 2011, has two lawsuits pending, including one against the city of Inglewood and its mayor over building a new arena adjacent to the Forum and the site of the future home of the Los Angeles Rams and Los Angeles Chargers.

“We won’t go into the details of any of the legal things, but we feel good that we will be able to build our building,” Ballmer said. “Litigation is never a good thing. Madison Square Garden is certainly going to oppose in every way they can. They will continue to oppose us in a variety of different ways, and yet we feel confident that we will be able to get our building built by 2024, which is when our lease ends at Staples.”

“It’s about protecting the Forum,” Ballmer added of MSG’s lawsuit. “They don’t want another concert competitor. … I understand that interest. What I don’t understand is a litigious approach to that. I don’t understand that. We had the same issue at Microsoft. There are people who had a problem. OK, work it through. But getting litigious, that makes everything awkward.”

Ballmer said he will have the “billion-dollar-plus” project on 26 acres completely privately financed.

The Clippers franchise had an historic July. Ballmer was at his coastal home about two hours outside Seattle on July 5 when he got the phone call he had been waiting for.

Dennis Robertson, Leonard’s trusted uncle and adviser, called the Clippers owner around 11 p.m. to inform him that Leonard was joining the Clippers. Ballmer didn’t want to wake his wife’s family sleeping in the house at the time, but he reacted the only way he knows how: He let out a scream.

“Yeah, a little bit,” Ballmer said, laughing loudly before clapping his hands. “There were people sleeping. But I did not wake anybody up.”

While the proposed arena wasn’t a major factor in landing Leonard, the Clippers let him know of their commitment to the team and an arena they can call their own.

“I don’t want to say it was a major milestone in the meeting, but we did share because it is another statement that we are really committed,” Ballmer said. “I don’t know how it’s humanly possible, but I still occasionally get a question about it: Will your team move to Seattle? We are building our billion-dollar-plus house here in Inglewood, California.”

Guns, Weed & Toilet Paper: How Rona Got its Nickname and...