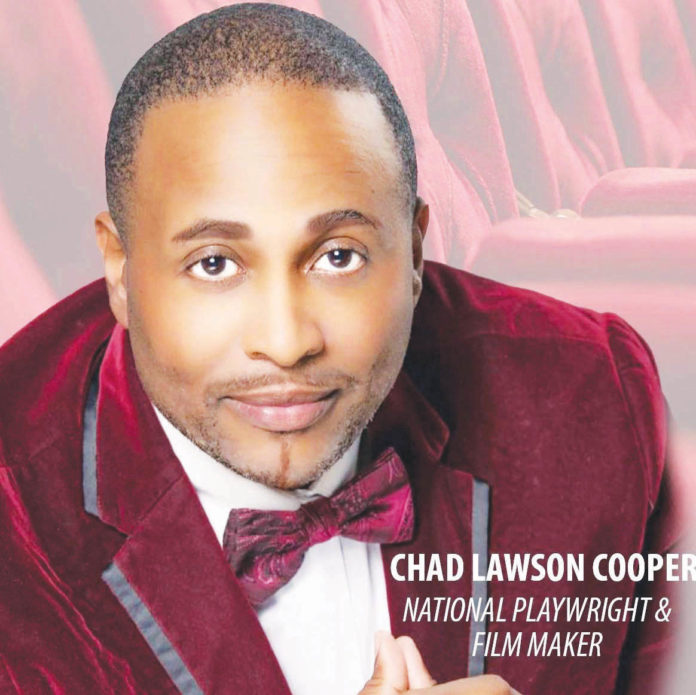 In a noticeable departure from his previous plays that focus largely on church centered themes, Cooper has chosen to focus on a popular social movement, namely Black Lives Matter.

Cooper felt compelled to change up the script after hearing about the death of an African American man who was gunned down by the police while with his wife and child. At that moment, he realized that he could be next, and was prompted to write a play that reflected his sentiments.

The play places the Black Lives Matter movement in a historical context. In “Black Lives Matter Too” we go back in time to transformative historical moments such as the murder of Emmet Till in 1955, the murder of Medgar Evers in 1963, and the sacrifice of Harriet Tubman in freeing hundreds of slaves in the late 1800s. Each narrative is used by the lawyers of the play to help substantiate their claims that black people are owed 6.4 trillion dollars in reparations. To further illustrate their point, the prosecutors refer to instances where other marginalized groups have received reparations for wrong doings perpetrated by the United States. They highlighted that Japanese Americans and Native Americans received millions, or possibly billions of dollars in reparations.

Throughout the play, we are forced to contemplate that if all lives truly matter, then black lives should as well. In theory, this is a very true statement, but in practice it seems time and time again that the Black experience is vastly different from any other racial experience. The actors constantly speak about the many ways that Black lives have proven to matter less than other lives. Blacks, they insist, have been killed for minor offenses such as selling cigarettes or even the completely legal act of walking with a hoodie and a bag of skittles.

One of the most poignant moments of the play is when the playwright has deceased victims of racial discrimination and injustice take the stand. We hear from Emmet Till, Harriet Tubman, and Medgar Evers. Their testimony serves to buttress the prosecutor’s claims that African Americans are owed reparations. This had me thinking about how powerful of a case for reparations Black people could have if actual victims of racial intolerance got to tell their truth. It was especially difficult to watch the recreation of Emmet Till as a 14-year-old, badly beaten young man. Of course, we all know that Emmet Till was in fact beaten to death, but for the play’s sake he was merely badly beaten.

When Harriet Tubman takes the stand, she has visibly blackened eyes which are likely meant to portray the fact that in real life, Tubman had head injuries due to beatings at the hands of her slave owner. Tubman sings and emotionally explains to the court that, contrary to the defense’s accusations, she is not a criminal for leading countless slaves to freedom. A consistent tactic of the defense was to portray the African-American heroes of the play as criminals. When Medgar Evers testifies, he explains how he was killed for trying to encourage African-Americans to be conscious of where they spend their hard-earned money. Evers, was well ahead of his time in advocating that Blacks support their own businesses. Finally, towards the end of the play, after a somewhat contentious jury deliberation, the plaintiffs win their case and African Americans are awarded their long overdue reparations. A good ending to an equally good play.

“Black Lives Matter Too” was launched at 7pm in Medgar Evers College located at 1650 Bedford Avenue, Brooklyn, New York 11225. For ticket information call 1.888 977.2282 ext.100. The production moves to Manhattan on June 28-July 1st, 2017 at a location to be announced. Productions media marketing partners of “Black Lives Matter Too” are DBG Media and BG Legacy Ventures.

is an avid reader and scholar whose passions include community development and empowerment. She can be reached at pmensahbrooklyn@gmail.com