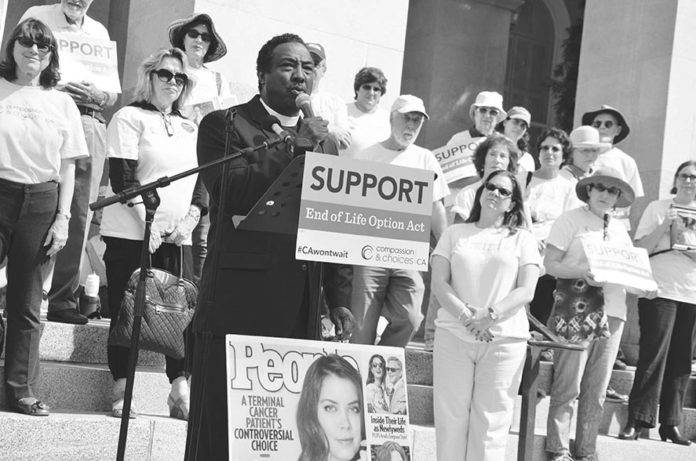 University of California (UC) Board of Regents is considering whether or not to allow their expansive UC Health Systems (UCLA, UCSD, UCSF, etc.) to affiliate with religious hospitals and healthcare facilities that would deny Californians access to a full range of options, including end-of-life care options for the terminally ill.

“Health disparities in the African American and Latino communities are only exacerbated when healthcare systems create roadblocks to people getting the care they want, especially at the end of life,” said Brandi Alexander, Compassion & Choices’ National Director of Constituency. “Such a move will undoubtedly impose unnecessary obstacles on people who are already suffering terribly.”

The warning comes as the UC Board of Regents determines whether or not they will stand with integrity and not allow the UCs to affiliate with hospitals and healthcare facilities that would deny terminally ill Californians access to the full range of end-of-life care options.

Only 50 percent of African Americans have talked with family members about their end-of-life care and 20 percent have not talked to anyone about it, according to a study by Duke University.

Fewer than 10% of those enrolled in hospice are African American.

“Black hospice enrollees are significantly more likely than white enrollees to be admitted to the hospital, visit an emergency room and withdraw from hospice,” said Alexander. “Latino seniors also have little knowledge about their end-of-life care options, and are far less likely to enroll in hospice.

One option available in California, eight other states and Washington DC is medical aid in dying; which was authorized in California through the passage of the state’s End of Life Option Act.

The law, which took effect June 9, 2016, gives mentally capable, terminally ill adults with six months or less to live the option to request prescription medication they can decide whether or not to take to die peacefully in their sleep if their suffering becomes unbearable.

Amanda Villegas witnessed her late husband, Chris Davis, suffer horribly before his death from bladder cancer at age 29, the result of his hospital’s decision to deny him access to the medical aid in dying that he requested so that he could die peacefully.

“A religious hospital in Southern California failed my husband by denying him the aid-in-dying medication that he begged for, as tubes drained bodily fluids that protruded from his stomach, kidneys, and chest,” Villegas said. “That medical facility that claims compassionate care for their patients failed my husband, because of their religious ideology, denying him peace they could have easily allowed him to have, as his swollen skin was bursting from the pressure of edema. No dying patient should ever have to suffer that way.”

“The law put that decision where it belongs: firmly in the hands of the terminally ill,” he added.

Tom Whaley, whose wife Christine died at age 42 in 2018 after a six-year battle with an aggressive form of skin cancer, fully supported his wife’s decision to access medical aid in dying when her disease got to the point where she was having trouble swallowing and breathing.

But Christine’s first request to her doctor was denied because the doctor was affiliated with a religious hospital that prohibits its physicians from helping terminally ill patients access the law.

“The hospital said medical aid in dying was against their values, but what about Christine’s values? Whaley said. “Hospitals should not deny treatment based on their ‘religious reasons’ to patients who most need it,” Whaley added.

Although three out of four Californians across the demographic spectrum support the End of Life Option Act, serious obstacles to accessing it remain.

One-third of terminally ill patients at Kaiser Permanente Southern California who requested medical aid in dying were unable to complete the process before they died, according to a study published by the Journal of the American Medical Association (JAMA).

The UC’s Working Group on Comprehensive Access (WGCA) was charged with offering recommendations to the Board on whether or not to allow the UC health systems across the state to be able to affiliate with prohibiting facilities but could not reach consensus. ate with religious hospitals.

Alexander urged concerned Californians to email the UC Regents to tell them to reject any policy that includes affiliating with facilities that prohibit doctors from supporting patients in all available options.

“Empowering our communities to make informed decisions that fit their values is critical, particularly during the end-of-life process,” she said. “UC Regents must not make access worse by supporting hospitals and healthcare systems that suppress information that terminally ill people need and have a legal right to.”