If you grew up in Los Angeles, then you have heard the name Larry Drew, and immediately reminisce back to the Showtime Lakers and the NBA legends that dominated the Inglewood spotlight at Forum during the 80’s and 90’s.

After high school he earned a scholarship at North Carolina before transferring and finishing at UCLA.

He toiled in the G-League, enduring pit stops with the Philadelphia 76ers twice and finally with the New Orleans Pelicans where he last played in the NBA 2018.

Since retiring, Drew II, as he is known by, has transitioned out of basketball and discovered a new way to create opportunities for others by utilizing lifelong relationships which has produced reputable name in Southern California and beyond.

Currently, the Vice President of talent at WHO HAS IT?, innovative “tech” company that has revolutionized how brands interact and engage with influencers.” Drew II has brought his personalized unique and polished brand credibility to an industry lacking genuine connections.

The former hoop star has stepped into the leading role on the executive team by introducing and elevating athletes to WHO HAS IT?’s preeminent concierge platform where the hottest products are delivered straight to their doorstep, studio, gyms or next event.

WHO HAS IT? has curated products and on-site experiences for some of the top weddings, birthday parties, and charity events for A-list Celebrities and professional athletes. If you want it, Drew II has it (for real!)

The participants were offered gift boxes that included an assortment of over 50+ products across Snacks, Beverages, CBD, Wellness and more. Who would not have been impressed by   the careful selections and close attention to detail. It was marketing and branding at its absolute best.

If you are a Brand and looking to get your products in front of the right people, a Celebrity looking to discover emerging brands & products, or just want to purchase the best gift box you never thought existed (until now) — You need to sign up for WHO HAS IT? at

It will likely be the best decision you ever made. 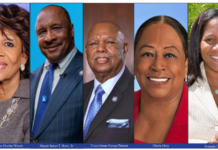 Why Are Black Men Voting For Trump?