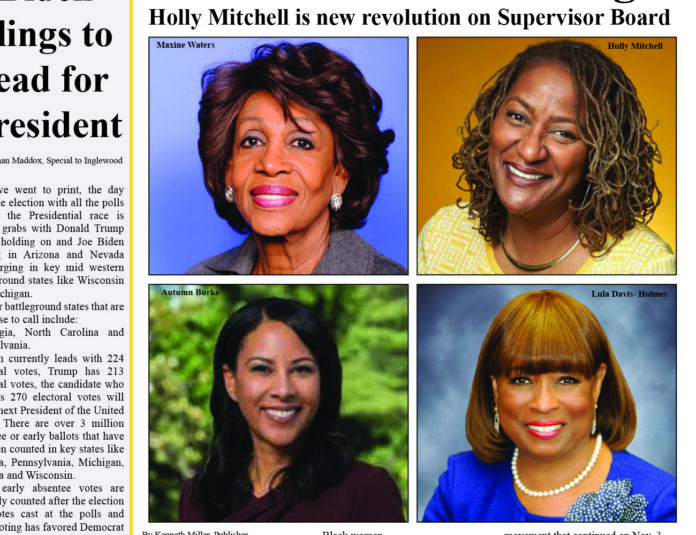 As much as the 2020 general election was about an appeal for change at the top of the ticket when all of the ballots were cast it revealed that it was more about women, more specifically local Black women.

The choice of Joe Biden to select Kamala Harris as his Democratic Vice President running mate as the first woman and woman of color to serve in such a capacity on the heels of the 2018 Mid Term women revolution inspired a movement that continued on Nov. 3.

The major surprise of the local elections was Holly Mitchell’s monumental defeat of  former Los Angeles City Council President Herb Wesson in the race for the Los Angeles County Board of Supervisors 2nd District.

L.A. County, which encompasses Inglewood and is home to more than 10 million people is an enormous swatch of the electorate and the position of Supervisor offers political might and influence that is arguable greater that most federal officials.

For Mitchell to defeat Wesson a career politician who was considered the power broker of Los Angeles City Hall demonstrated that name recognition alone is not enough to win.

With the weight of heavyweights such as Governor Gavin Newsom

Mitchell becomes just the second Black woman to serve as 2nd District Supervisor since Yvonne Brathwaite Burke who retired in 2008.

Elected to the State Senate in 2010,  Mitchell has been cited for her outstanding leadership by more than 100 community and business groups, including the Courage Campaign, Sierra Club, United Cerebral Palsy Association, the Greater Los Angeles African American Chamber of Commerce and the Women’s Foundation of California Board. She was named the 2019 National Leader of the Year by the Fathers & Families Coalition of America and this year received the Budget Champion Award from Provider Alliance to End Homelessness.

In the California Assembly, the daughter of Burke, Democrat incumbent Autumn Burke rolled past Republican Robert Steele, to win reelection 62nd Assembly District which among other cities serves Inglewood.

Burke captured 82 percent of the vote and appears poised to run for either the State Senate or perhaps The United States House of Representatives in the next few years.

Holmes has served on Carson City Council for over a decade. She was elected for her first term in 2007, then re-elected for a second term in 2011 and is now serving her third consecutive term that began in 2015. Throughout her terms as a member of council, she has been appointed twice as Carson’s Mayor Pro Tem in 2009-2010 and again recently in 2016-2017.

Since her election to the City Council 11 years ago, Lula worked vigorously to improve the quality of life for the residents of Carson by running lead on and supporting numerous projects such as the Utility User’s Tax, which brought additional revenue to the city.

Officials Release Names of those Killed in Racist Buffalo Massacre