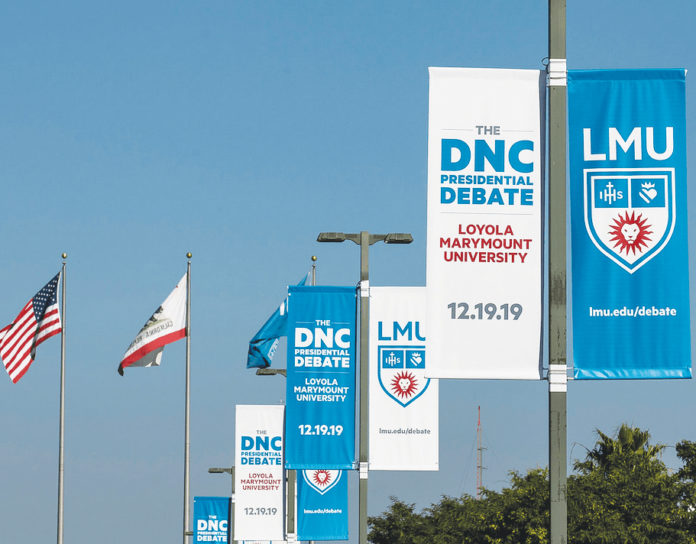 And then there were seven, as in Democratic National Committee (DNC) presidential candidates vying for the shot at unseating impeached President Donald J. Trump, but during the final debate of 2019 at Loyola Marymount University on Dec. 18 came up short in two glowing categories, that of race and the impeachment of No. 45.

The lone African American remaining in the race for nominee Sen. Cory Booker did not qualify for the PBS NewsHour POLITICO sponsored event and was instead campaigning in Iowa.

To meet the qualifying criteria of the DNC candidates were required to meet polling and fundraising thresholds designated by the DNC by Dec. 12. Booker, Gabbard and Bloomberg did not meet these thresholds.

However, Booker is polling at 2 percent, above Steyer and just below Yang.

Yang, the only minority on stage at LMU raised eyebrows with his comments about the impeachment of Trump and the ongoing saga.

“We have to stop being obsessed over impeachment, which unfortunately strikes many Americans like a ball game where you know what the score is going to be, and start actually digging in and solving the problems that got Donald Trump elected in the first place,” Yang said, just a day after House Democrats impeached the President.

The businessman argued that the more Democrats “act like Donald Trump is the cause of all our problems, the more Americans lose trust that we can actually see what’s going on in our communities and solve those problems.” In his response, Yang said “we have to stop being obsessed over impeachment.”

The DNC did allow for retired Congresswoman Diane Watson to grace the stage during the event, but Watson has been out of office since 2011.

There was one question about reparations, but each candidate was very evasive of answering or in the most glaring respects not answering it at all.

African Americans and Mexican Americans will have a difficult choice to make in the weeks and months ahead of the 2020 Presidential election in deciding on which candidate meets their essential requirements.

Biden is leading in most polls as the top candidate, but Buttigieg, who was the target from established politicians Warren and Klobuchar has been climbing in the polls dramatically.

Sanders, the candidate who may have been most responsible for Hillary Clinton’s defeat in 2016 because his voters did not transfer their allegiance to the Democratic nominee is in sharp decline in the polls.

Few if any are giving Steyer a shot, the man who launched an impeachment petition and garnered 8 million signatures, and his answers at the LMU Debate did not offer much promise.

About the protest in Hong Kong, he said the U.S. needs to do more to “push back,” but he also said we should not be the “world’s policeman” — “if we are going to treat climate as the threat that it is, we are going to have to partner with the Chinese.”

Biden may have enjoyed his best performance yet, being candid, sharp and precise on most questions.

Asked about his age and if he would seek a second term, Biden responded that he has not even been chosen as the nominee and is least of all not concerned about anything beyond that.

Iowa is next on Jan 14 and Biden, Warren, Sanders, Buttigieg and Klobuchar have qualified. Buttigieg was narrowly leading in many of the Iowa polls, but Klobuchar has already begun a massive 90 county bus tour in the state.