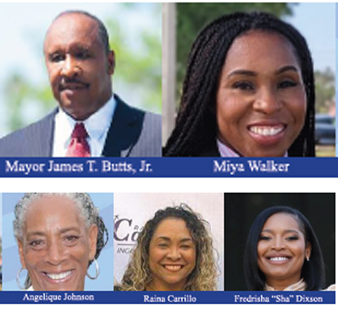 The City of Inglewood is on the ballot big time in the Nov. 8 General Election as Mayor James T. Butts, Jr. faces opposition from 5 candidates.

Since defeating incumbent Danny Tabor on January 27, 2011 by a margin of 776 votes, Mayor Butts has spearheaded a revolutionary renaissance in the City of Inglewood no one thought imagined, but some contend he did so with an iron fist that does not allow for open and fair debate from constituents or council members.

Among his challengers are USC graduate Miya Walker, named after Maya Angelou, who has spent two decades working in leadership roles, including in the public sector.

Known for her award-winning strategies, Walker is part of the president’s office and works as the Director of College Relations, Public Affairs, and Governmental Relations at Cerritos College.

A resident for the past 7 years she is among four women in the race; the others are Angelique Johnson, Raina Carrillo and Fredrisha “Sha” Dixson. Chika Ogoke is the lone male candidate in the field.

According to her campaign website, Johnson states she grew up in Inglewood, learning sportsmanship and leadership through sports and reactions in the Parks & Recreation System. She attended Morningside H.S. and graduated from St. Mary’s Academy. Johnson has worked and lived in the community of Inglewood for most of her life.

He set a tone that outpriced people,” she said, referencing Mayor Butts. “Eventually, there’s going to be a shift, there’s going to be empty apartments and empty homes because they’ve outpriced themselves. The stadium does not improve your quality of life. The residents of Inglewood cannot even afford a ticket.”

Carrillo is a Mexican American with Louisiana Creole heritage, born and raised in Inglewood, she claims.

In 1995, during her sophomore year of high school, I joined a Violence Prevention Program called Peace Colors and was an at-risk youth.

“I have been canvassing door to door for my campaign and 90% of our residents that I have spoken to are not happy with the gentrification and the displacement,” she said. “Affordable Housing is being misused because these new apartments are very pricey. I plan to create permanent housing and redefine what real affordable housing should be. I called to check on a new building for a three-bedroom apartment, and it was $3500 a month, which is insane.”

Dixon an activist, community organizer and legal professional, has an eye on creating more social service programs to help reduce homelessness. If elected, she wants to fund social services, including Mental Health Programs, and establish an emergency shelter equipped with social workers and access to necessary resources.​

“I want to create avenues for Inglewood businesses to benefit from the visitors coming into our city to patronize our entertainment centers,” she said. “I want to be mayor because I love my community and want to help my constituents have the best quality of life they can possibly have.”

The biggest issues Ogoke wants to address include turning more of the city’s assets into affordable housing; redoing the rent control bill for a lower percentage;

Our Weekly Newspaper contributed to this report