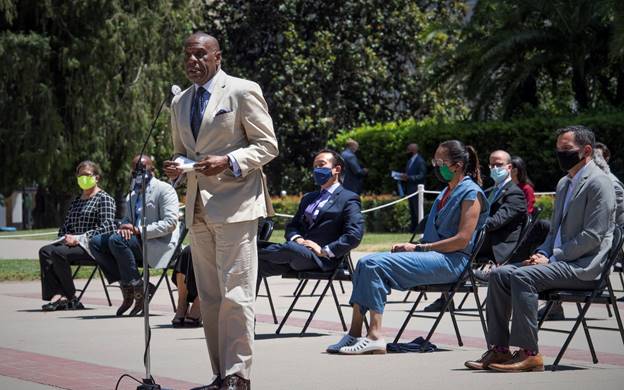 SACRAMENTO –Senator Steven Bradford (D-Inglewood) and other California elected representatives gathered at the West Steps of the state’s capitol to pay tribute to the late George Floyd.

“We knelt in silence, honor and respect for George Floyd’s life. But we also placed a collective knee on police brutality and racism in this country,” said Senator Steven Bradford. “Over the last fifteen days we have witnessed one of the most amazingly diverse peaceful protests across the world. We are sick and tired of being sick and tired of the cycle of the wash, rinse and repeat approach to racism and police brutality. Now is the time to stand up.”

On May 25, 2020, Mr. Floyd was killed during an arrest where the officer knelt on his neck and back for eight minutes and forty-six seconds, ignoring cries that he could not breathe, while other officers did nothing. Four officers involved in the arrest have been charged with counts of second-degree murder and aiding and abetting second-degree murder.

Mr. Floyd’s death comes only six weeks after police in Louisville, Kentucky, fatally shot Breonna Taylor, a 26-year-old black woman, during a midnight “no-knock” raid on her home. It comes ten weeks after the killing of Ahmaud Arbery, a 25-year-old black man, who was chased down by a white father and son in a pickup truck as he jogged in his neighborhood in Glynn County, Georgia.

Billions in New COVID Relief: From $600 Stimulus Checks to Black-Run...