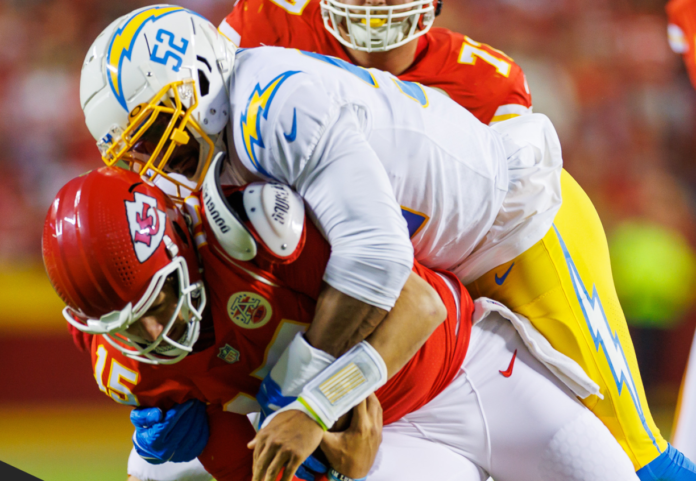 By Eric Smith, The Chargers

The Chargers are 1-1 following a pair of division games to open the season.

1. Khalil Mack is back

There was plenty of outside chatter this offseason about Khalil Mack, with many pundits wondering if he had lost a step of late.

Nobody is saying that about the Chargers outside linebacker after his strong start to the 2022 season.

Through two games, Mack ranks second in the league with 3.5 sacks, trailing only Micah Parsons of the Cowboys.

Mack notched a trio of sacks in the season opener and then collected a half-sack against the Chiefs, sharing it with Drue Tranquill. He also forced a fumble in Week 1.

There’s still a long ways to go this season, but Mack has been a dominant threat on the field as he’s teamed with Joey Bosa to create a dangerous defensive duo.

Speaking of Bosa, he has 1.5 sacks and a forced fumble through two games. Here’s what Chargers Head Coach Brandon Staley said of Bosa after Week 1:

Put another way, Staley was praising Bosa in multiple facets of his game, not just in rushing the quarterback.

And Bosa is a key reason why the Bolts run defense ranks seventh in the league entering Monday night. Through two games, the Chargers are allowing just 78.5 rushing yards per game.

The Bolts gave up just 64 rushing yards to the Raiders in Week 1 before allowing 93 yards to the Chiefs, although 52 of Kansas City’s yards came on one play.

The Chargers will need to be stout again Sunday against a Jacksonville offense that is averaging 109.5 rushing yards per game so far in 2022.