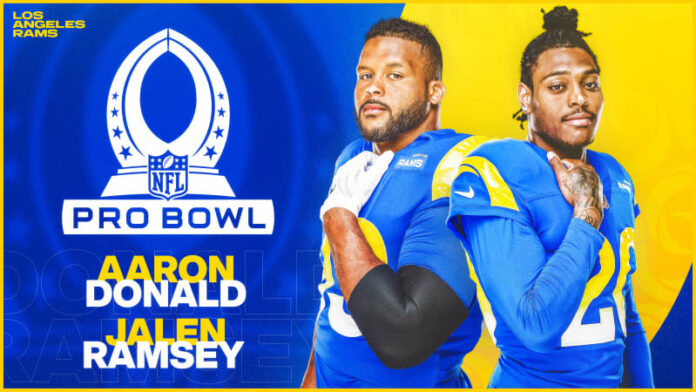 For Donald, it marks his seventh-consecutive Pro Bowl nod, which means he’s been chosen for the distinction in every year of his NFL career so far. Per Sportradar research, he is just the third player in franchise history to begin their career with 7 or more straight Pro Bowl nods, joining Merlin Olsen (14) and Les Richter (8).

Donald is currently tied with Saints defensive end Trey Hendrickson for the NFL lead in sacks with 12.5 – his fourth-straight season with double-digit sacks – and has also made 38 total tackles, four forced fumbles, one fumble recovery and one pass breakup through 14 games.

For Ramsey, it’s his fourth-straight Pro Bowl selection – the No. 5 overall pick in the 2016 NFL Draft has been chosen every year since 2017. He has produced 37 total tackles, four pass breakups and an interception in 13 games this season.

The NFL announced when fan voting opened on Nov. 17 that the 2021 Pro Bowl will be conducted virtually via EA SPORTS’ Madden NFL 21 video game as a result of the in-person all-star game – originally scheduled to be played at Allegiant Stadium in Las Vegas on Jan. 31, 2021 – being cancelled due to the ongoing COVID-19 pandemic.

According to that news release, “EA SPORTS and the NFL will create a week-long series of matchups featuring celebrities, NFL legends, current players and streamers playing as the official Pro Bowl rosters in Madden NFL 21.” Those matchups will culminate with a virtual Pro Bowl game being played with 2021 Pro Bowl players facing off within Madden NFL 21.

Fans will be able to watch all these virtual matchups on a variety of platforms, and EA SPORTS will be dropping new Pro Bowl content in-game for players of Madden NFL 21 as part of the experience.