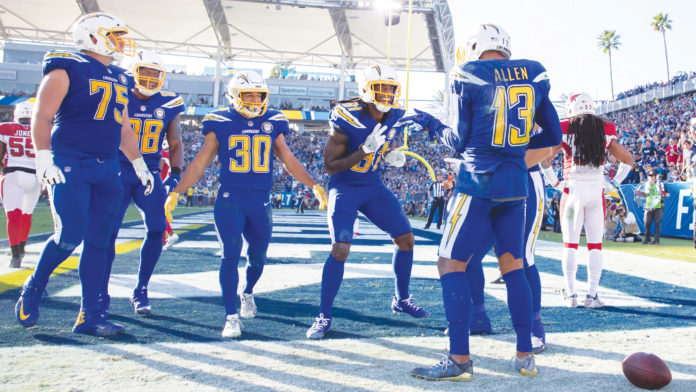 Notable numbers from the Chargers’ Week 16 game against the Oakland Raiders:

Running back Austin Ekeler and wide receivers Keenan Allen and Mike Williams have now each eclipsed 900 yards receiving this season, becoming the first trio of teammates to do so since 2014 when New England had Rob Gronkowski, Julian Edelman and Brandon LaFell each exceeded the 900-yard mark.

Ekeler amassed 58 yards receiving on five receptions during the Chargers’ home finale. This brought his season total to 950 yards receiving, passing Ronnie Harmon (914) for the second-most in a single season by a Bolts running back. Ekeler also moved to No. 8 on the franchise’s all-time receptions list at his position.

Derek Watt accumulated his 16th special teams tackle, which ties him for the NFL lead with Steelers linebacker Tyler Matakevich. As a result of the fourth-year fullback’s outstanding play, he was named an alternate at special teams for the AFC in the Pro Bowl.

Safety Derwin James led the Chargers in total tackles for the second game in a row with eight, including one for a loss. He has 26 combined tackles in four games this season, with three being for loss.

Defensive end Joey Bosa’s sack of Raiders QB Derek Carr was the sixth of his career, the most he’s taken down any quarterback. The leader in Pro Bowl fan voting among AFC defensive players now has 40.0 career sacks, 3.5 from tying linebacker Shawne Merriman (2005-2010) for seventh on the Bolts’ all-time list.

Running back Melvin Gordon’s pair of touchdowns brought him to 35 in his career, moving him past Natrone Means (1993-1999) for No. 4 on the franchise list for rushing touchdowns. Paul Lowe (1960-1968) stands three rushing touchdowns ahead with 38. Gordon also moved into sole possession of second place among Bolts running backs with 46 total touchdowns. After Rams RB Todd Gurley, Gordon has scored the most TDs in the NFL over the past three seasons.