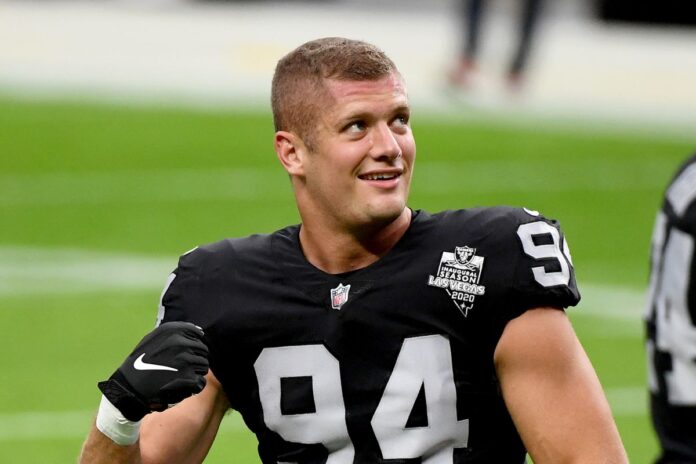 By Shannon Belt, IT Intern

The timing was crucial as Carl Nassib, a defensive lineman for the Las Vegas Raiders, made history as the first active openly gay NFL player. On June 21, Nassib posted a video accompanied with a statement, a culmination of only the warmth and acceptance of June, the month of Pride.

“I just want to take a quick moment to say that I’m gay,” Nassib announced on a post made from his Instagram. “I just think that representation and visibility are so important. I actually hope that one day videos like this and the whole coming-out process are just not necessary, but until then I’m going to do my best and my part to cultivate a culture that’s accepting, that’s compassionate.”

After Nassib publicly came out, he was met with waves of support ranging from his current team to the top of the NFL franchise. The following day NFL made its own Instagram post declaring its support of Nassib and matching his $100,000 donation to The Trevor Project, an organization that focuses on LGBTQ youth. To be greeted so warmly and with open arms is something most professional athletes are unsure they will receive if they took the same step as Nassib. Living under the public eye is one of the side effects of being on a professional level in sports. With that comes an overwhelming sense of intrusion into private lives and leads to speculations of private things such as sexual orientation.

As Nassib enters into his sixth season in the NFL and second with the Raiders, his role as a difference-maker in the sports world still ultimately boils down to time. Today’s social climate and even sports climate are constantly transitioning and pushing the boundaries of what is deemed the “normal.” If you look back to 2013, a huge year for the LGBTQ community in regards to sports. All in the same year months apart, Michael Sam, Jason Collins and Robbie Rogers publicly came out as gay. While all three athletes received support, none came close to the feeling of coming out in a much more progressed time as Nassib did. Despite having trailblazers who have come before him and the coming out process- yes it is a process – is one that never gets any easier, especially in an environment like sports where being gay is taboo.

“Sadly, I have agonized over this moment for the last 15 years,” Nassib continued in his post. “I’ve been meaning to do this for a while now but, I finally feel comfortable enough to get it off of my chest.”

The sports environment has begun to step by step tackle social issues, taboos, and things many people think might have nothing to do with sports. From racism to gender equality to sexual orientation, if you thought that turning the channel to ESPN meant escaping those things think again. Nassib’s push for awareness and acceptance has been long overdue not only in the NFL but in the sports world in general. Pride months are usually filled with courageous acts and this June Nassib etched his name in history. He is the first of hopefully more professional football players to decide to open up this part of their lives to the world as there is strength in numbers.

“Lastly, I hope everyone can understand that I am just one person,” Nassib said in the final slide of his post. “I am a lanky walk-on who is living his dream. I only have a small window to achieve greatness in my sport and I owe it to my team, coaches, and Raider fans to be completely locked in and at my best for the upcoming season.”

Inglewood Today partners with The 11 Eleven Network to bring entertainment,...

Los Angeles Rams and Fuel Up To Play 60 Award Inglewood...