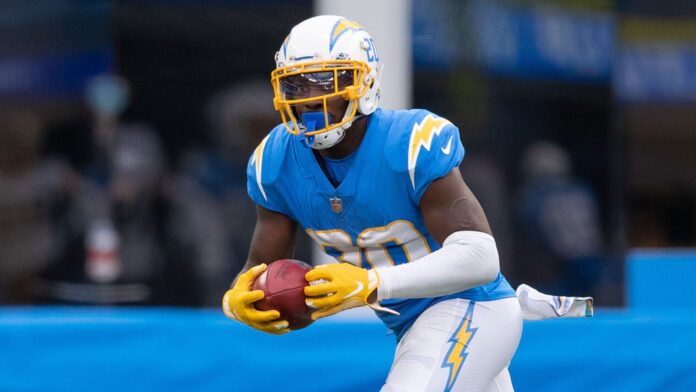 The Chargers will welcome the Las Vegas Raiders for the first matchup between the teams of this season on Nov.  8, at 1:05 p. m.  at SoFi Stadium.

Los Angeles has scored 20-plus points in four of the last  five contests, winning three of those games by double digits  Bolts defensive end Melvin Ingram III is riding a five-game sack streak against the Raiders

Averaging 417 net yards per game, the Chargers boast the NFL’s No.  2 offense this year.

Led by Justin Herbert’s AFC-best 303 3 passing yards per game, Los Angeles’ passing attack has seen eight different players catch touchdowns.  Keenan Allen has caught 53 passes for 548 yards and is on pace for single-season career highs in each  Defensively, Joey Bosa leads the team with 4 5 sacks and ranks No  2 in the NFL this season with 23 quarterback pressures.

After a 10-point win in Cleveland last week, Las Vegas sits with a 4-3 record this season Josh Jacobs ranks fourth in the AFC with 522 rushing yards while Derek Carr’s 70 6 completion percentage over the last two years ranks No.  3 in the NFL among qualified passers  Maxx Crosby leads the team with four sacks this season

Los Angeles heads to South Florida for the second straight season to play the Dolphins in Week 10 The Bolts won last year’s matchup, 30-10, and look to win back-to-back games in Miami for the first time since 1980.

It marks the most receptions since 1970 in a player’s first 93 career games.

5-Melvin Ingram III has a five-game sack streak against the Raiders.  A half-sack or more on Sunday would tie for the longest active streak against one team.

The Chargers traded defensive back Desmond King II to the Tennessee Titans.

In exchange for King II, the Chargers will receive a 2021 sixth-round draft pick from Tennessee.

Inglewood– the new capital of the LA Clippers