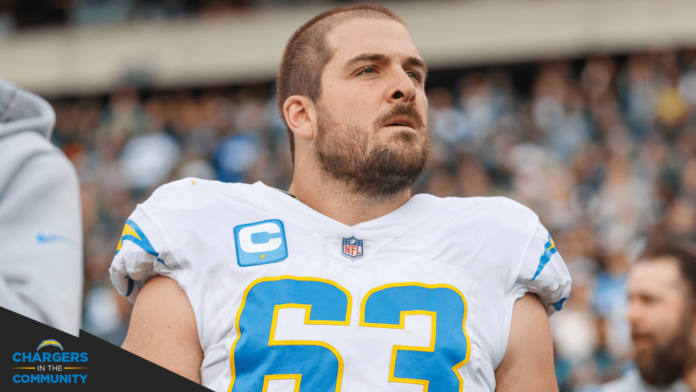 Corey Linsley is the Los Angeles Chargers’ nominee for the 2021 Walter Payton Man of the Year Award. Presented by Nationwide, the award recognizes a player’s excellence both on and off the field.

Linsley earned the team’s nomination for his dedication to supporting the Chargers’ community efforts as well as philanthropic work he does on his own.

Although he’s new to the Chargers, Linsley has wasted no time making an indelible mark on the fabric of the team’s community.

Most notably, Linsley and his wife, Anna, have brought their ongoing support of Court Appointed Special Advocates (CASA) out west.

CASA is an organization which appoints certified volunteers to advocate in the best interests of children, since they cannot speak for themselves. In L.A. County, 30,000 children, who have been abused or neglected, are under the jurisdiction of the Dependency Court.

The Linsleys started their work with CASA Brown County when Corey was with the Green Bay Packers, even getting certified to become advocates themselves. With the Chargers, they’ve gone on to work with CASA Los Angeles and CASA Orange County.

“A lot of these kids don’t have anybody in their life who’s gonna be there for them 24/7,” Linsley said. “To have somebody who is consistently there, week after week, they know that they can lean on this advocate and trust them. Trust is a huge thing for these kids. They live in a world where it doesn’t exist, so for advocates to be there for them consistently, develop that trust, develop that relationship and show them how healthy it is and beneficial it is, it’s so special for these kids and means the world to them.”

Following in the footsteps of the Chargers Impact Fund’s $30,000 ‘Digital Divide’ grant to CASA L.A. for laptops and software subscriptions, Corey and Anna personally pledged an additional $30,000 to be used as a 1:1 match to encourage even more donations to CASA L.A. and OC throughout the month of November leading in to “Giving Tuesday.” These donations ensure children and families affected have equitable access to resources and support they need.

“I think the real deal is spreading awareness to CASA,” Linsley said. “It’s awesome to be nominated but the exposure to CASA will hopefully bring in a lot of needed advocates and volunteers in whatever form. That’s really what this is all about.”

Fans are encouraged to participate in Nationwide’s 7th annual Charity Challenge, a social media campaign designed to support and promote team nominees. Chargers fans can vote on Twitter by using #WPMOYChallenge + Linsley. The player whose unique hashtag is used the most between Dec. 7 and Jan. 17 will receive a $25,000 contribution to their charity of choice, while the second and third place finishers will receive $10,000 and $5,000 donations, all courtesy of Nationwide.

Chargers and Herbert in control of own destiny